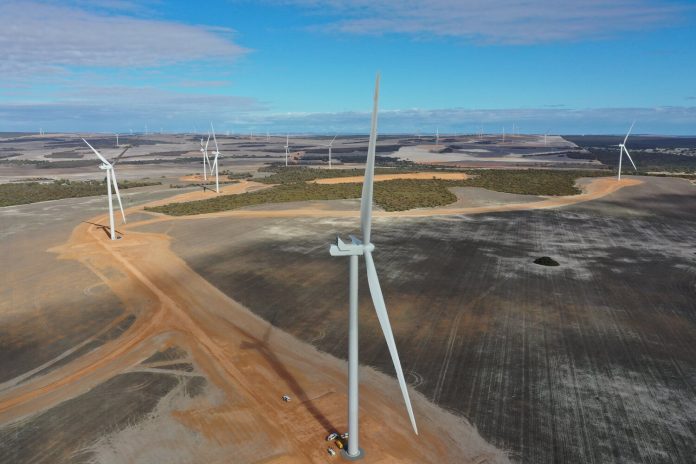 The 180 megawatt Warradarge Wind Farm in Western Australia is set to power up to full capacity by the end of October, according to Energy Minister Bill Johnston.

“It’s exciting to witness the sheer scale of this project, and without a doubt, the Warradarge Wind Farm will become one of the best, large-scale renewables projects in Australia,” Mr Johnston said.

“The McGowan Government is committed to improving energy affordability and creating a cleaner, greener energy system for Western Australians.

“This is a project that has delivered local jobs using local contractors and will further secure the future of energy supply in this State.”

Located near Eneabba, in WA’s Mid-West, the new wind farm features among the largest turbines in WA with a tip height of 152 metres, sporting some of the longest blades onshore at 66.6 metres.

Bright Energy Investments General Manager Tom Frood said more than 200 jobs were created over the construction period of the wind farm, adding that up to 10 jobs will be required during the operational phase.

“The Warradarge Wind Farm is a world-class asset, and the culmination of this significant project is reflective of the hard work and dedication of everyone involved.”