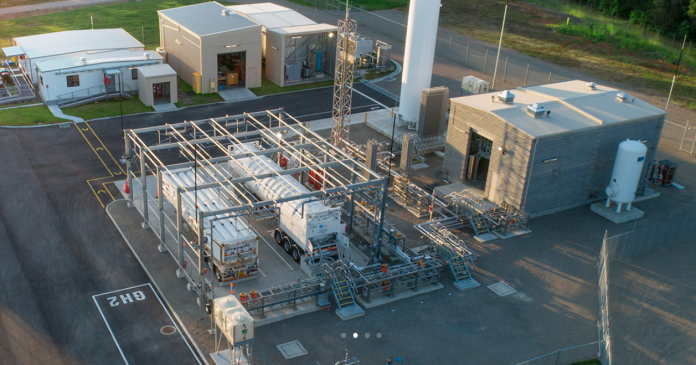 The Hydrogen Energy Supply Chain (HESC) Pilot Project, which launched in 2018, is converting brown coal from the AGL Loy Yang mine in the Latrobe Valley into hydrogen gas, which will be transported to Port of Hastings for liquefaction and shipped to Japan in the world’s first, purpose-built liquified hydrogen carrier, the Suiso Frontier.

The HESC Pilot is being delivered by a consortium of experienced industry partners from Japan and Australia including Kawasaki Heavy Industries, J-POWER, Iwatani Corporation, Marubeni Corporation, AGL and Sumitomo Corporation, supported by the Victorian, Australian and Japanese Governments.

HESC Project Partners, together with the Australian, Victorian, and Japanese Governments and distinguished guests marked the milestone on Friday at the coal gasification and hydrogen refining facility at AGL’s Loy Yang site.

Minister for Economic Development Tim Pallas said the pilot – which is expected to create 400 Victorian jobs over its life – will assist in establishing local skills, capabilities and infrastructure that will provide a platform for the development of a broad hydrogen industry in Victoria and Australia.

“The HESC Pilot Project will create jobs for the Valley and right across Victoria while boosting our economy,” Mr Pallas said.

“This is an important milestone for this world first project, which will help us transition towards a low carbon energy future while potentially creating thousands more jobs for Victorians if it reaches commercialisation.”

Hirofumi Kawazoe, from Hydrogen Engineering Australia – Kawasaki’s subsidiary company based in Melbourne – said the progress of the HESC Pilot places Victoria and Australia at the forefront of the global energy transition to lower emissions via the fuel of the future, clean hydrogen.

“The next major HESC Pilot development will be the first shipment of hydrogen between Australia and Japan, aboard the world’s first purpose-built liquefied hydrogen carrier, the Suiso Frontier,” Mr Kawazoe said.

“The eyes of the world will be on Victoria, when shipments of liquefied hydrogen commence in 2021.”

Jeremy Stone from J-POWER Latrobe Valley said a commercial-scale HESC project could produce 225,000 tonnes of clean hydrogen annually with carbon capture and storage, reducing CO2 emissions by 1.8 million tonnes per year, equivalent to the emissions of some 350,000 petrol cars

“A commercial-scale HESC can leverage and build local skills, potentially creating thousands of jobs. This will include long-term employment in a new clean energy industry for the people of Gippsland,” Mr Stone continued.

“Latrobe Valley has a proud history powering Australia and today we celebrate the next generation of energy technology in the region.”