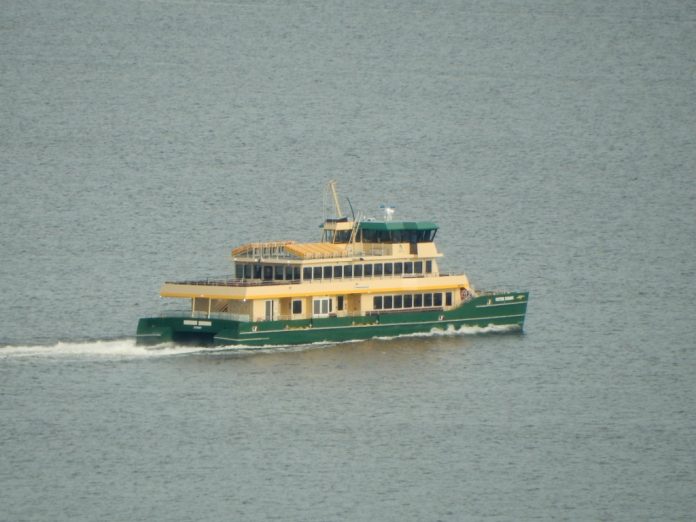 The 35 metre, 400 passenger boat is the fourth completed ferry out of six ordered from Incat by the NSW Government as part of its plans to modernise and expand the state’s ferry network.

The Sydney Ferries will service commuter and tourist travel on the inner harbour routes from Watsons Bay in Sydney’s east to Cockatoo Island in the west, stopping at the new Barangaroo wharf.

Speaking at the official launch ceremony, Mr Groom congratulated Incat on the achievement, saying the new boat showcases the company’s advanced manufacturing capability that will bring success in the years to come.

“It was my pleasure today to attend the launch of Incat’s latest Tasmanian-built Sydney ferry,” the Minister said.

“This is the fourth completed ferry out of six ordered from Incat by the NSW Government and Incat are reinvesting the dividends in Tasmania, with its workforce expanding significantly in the last 18 months to around 550 people.”

“This includes 33 new apprentices to support the Sydney ferry contract and other large projects they currently have underway.”

He said the Hodgman Liberal Government is committed to supporting new opportunities for Tasmania’s advanced manufacturers that will create more jobs for Tasmanians.

“Having the new vessels built right here in Tasmania will also strengthen our boat building reputation- an important element of securing other advanced manufacturing and defence-related contracts of significance, especially in the maritime sector,” Mr Groom added.

“On behalf of the Tasmanian Government, I want to congratulate everyone at Incat on this achievement and look forward to further growth and job opportunities for the future.”

According to Incat, the remaining two ferries are expected to be delivered to the NSW Government by the end of 2017.

French agribusiness to set up Australian HQ in Victoria