Located in Altona, west of Melbourne, the plant will produce approximately 108,000 four cylinder 2.5 litre engines per year for its locally built Camry and Camry Hybrid sedans. The new, more fuel efficient engines will also be exported to Thailand and Malaysia.

Toyota Australia President and CEO, Mr Max Yasuda said the official opening was a proud day for the Australian car industry and testament to the company’s team members who helped secure the new engine plant investment.

“This is a great day for Toyota Australia. The official opening of the new engine plant is part of our overall mission to transform our operations and build a more sustainable business,” Mr Yasuda said.

“We are now one of only four countries in the world to produce the AR four cylinder engine and are the first Australian car manufacturer to produce petrol-electric hybrid engines.”

Mr Yasuda said the unveiling demonstrated the efforts Toyota was taking to transform its operations to ensure local car manufacturing can maintain its presence in a highly competitive marketplace.

“I am a true believer in local car making. We are working to create a new, stronger business that gives us a competitive advantage that is sustainable and profitable for the future. Building a new engine plant in Australia is at the heart of our manufacturing strategy.

“The new engine plant is a significant milestone for Toyota Australia. It enables us to maintain our workforce and further develop our technologies, skills and products so we can continue building engines and cars in Australia for many years to come.”

Mr Yasuda praised the strong desire of both the Federal and State Governments to see more advanced car making technologies introduced to Australia. Along with support from the Victorian Government, the Federal Government contributed $63 million to the commissioning of the new engine plant from its Green Car Innovation Fund.

“An ongoing partnership between local car makers, the government and suppliers is fundamental for ensuring Australian industry can compete,” Mr Yasuda said.

The engine plant has been in development since October 2011. It replaces the original engine plant built in 1978, which was Toyota’s first engine manufacturing plant built outside Japan. The plant will go into full production from 14 January 2013 and produce approximately 450 engines per day.

Toyota Australia has been building cars in Australia for almost 50 years. In August 2012 it achieved one million exports sales, making it the first Australian manufacturer to do so. Later this month Toyota will also build its three millionth locally built vehicle. 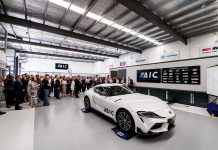 Press Contribute - January 21, 2020
Our Business is Growing Your Business!

Toolfixfasteners - January 1, 2015
Toolfix Fasteners is a family business with a commitment to servicing what we sell. Toolfix Fasteners offers a diverse range of premium quality glue guns,...

Lockheed Martin hot on the trail of nuclear fusion