BHP Billiton yesterday announced that Mr Tony Cudmore from ExxonMobil Corporation has been chosen to serve as President of the Company’s Corporate Affairs division.

According to the news release issued by the company, Mr Cudmore is to join the Group Management Committee and officially take charge of the Corporate Affairs division on March 3rd 2014.

The company confirmed that Ms Wood will remain a key member of the GMC and will continue her work on a range of significant corporate and Board issues with CEO Andrew Mackenzie, including GMC development and succession planning and executive remuneration. Ms Wood will also retain accountability for the Company’s office in London.

Mr Cudmore will perform his duties from the Company’s headquarters in Melbourne, Australia and will report to Mr Mackenzie.

Before joining ExxonMobil, where he was in charge of International Corporate Brand Communications and Asia Pacific Government Relations, Mr Cudmore was the Assistant Director of the Australian Institute of Petroleum and prior to that he was the Principal Adviser to the Premier of Victoria, The Honourable Jeff Kennett MP.

BHP Billiton’s new head of Corporate Affairs returned to Melbourne in November 2012 after spending six years in the US. Before moving back to Australia, Mr Cudmore was based at ExxonMobil’s head office in Dallas, Texas where he had numerous responsibilities and played key company roles, such as Manager of the Corporate Public Affairs division, as well as Manager of Media Relations.

For more information about the company, visit http://www.bhpbilliton.com/home/Pages/default.aspx 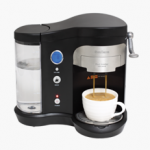 moniquesokolova - April 19, 2015
Looking for an coffee machine for your home or your office? Try the new AquaBrew TE 216 Granite Thermo Express Coffee Maker from All...

Australian water innovator Bilexys to showcase at WEFTEC in Chicago