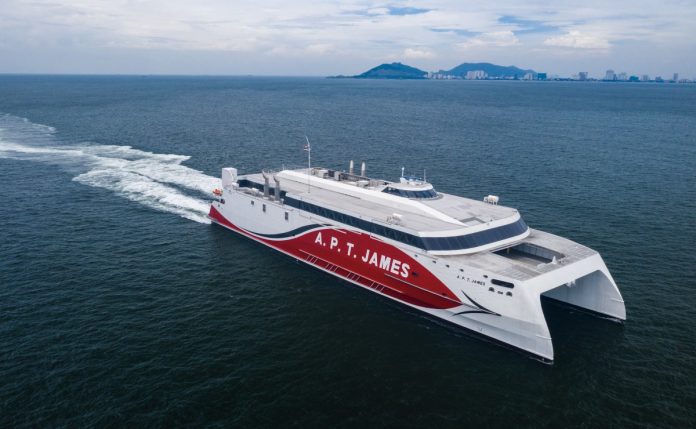 Austal Vietnam has successfully delivered the first vessel fully constructed at the Vung Tau shipyard, which opened less than two years ago.

Designed at Austal Australia, the 94 metre high-speed catamaran ‘A.P.T James’ features the company’s signature raked bow and optimised hull design that will transform maritime transport services on the Trinidad and Tobago ‘sea bridge’ route between the islands of Trinidad and Tobago.

Austal CEO David Singleton said the delivery of the first major commercial vessel from the Austal Vietnam shipyard demonstrated the skill and determination of the local workforce and the success of the company’s Australasian strategy.

“This is an outstanding achievement for both Austal Vietnam and the Austal Group as we continue to focus and consolidate our defence and commercial vessel capabilities in strategic locations throughout Australasia,” Mr Singleton said.

“Austal Vietnam is now clearly a valuable asset in our commercial vessel shipbuilding network, building upon and complementing the growing capability in the Philippines, while also freeing up capacity in our Australian shipyard for additional defence contracts for the Royal Australian Navy and export markets.

Austal Vietnam is currently working on its next project, a new 41-metre high-speed catamaran ferry for SGTM of Mauritius which is scheduled for delivery in the first half of 2021.

Ford filed patents for an astonishing 6,000 inventions in 2015

Alcoa’s aluminium rolling mills at Point Henry and Yennora close after half a century...