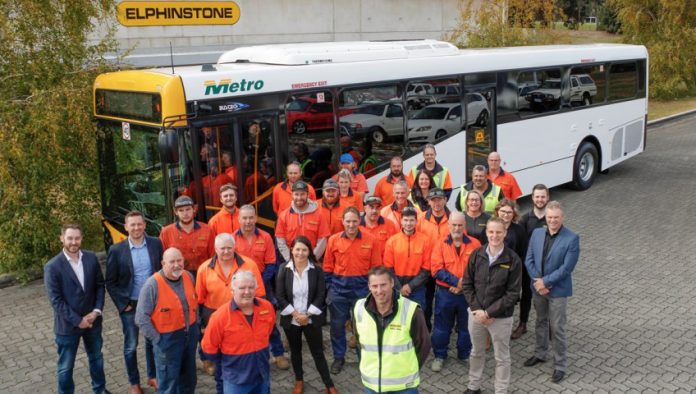 The 100th and final locally manufactured Metro bus for Tasmania’s Metro network has rolled off the production line at the Elphinstone facility in Wynyard.

The Tasmanian government pledged $31 million to assist with the purchase of the 100 new buses at a total cost of $45 million as part of a 4-year bus replacement program announced in November 2017.

The buses were built by Bustech, the manufacturing arm of Transit Australia Group, in partnership with Tasmanian company Elphinstone which specialises in building vehicles and equipment for the mining industry.

The new buses are all environmentally friendly, air-conditioned, and low floor. Metro said the new fleet are the lowest emitting engines available with 94% less nitrogen oxide and 96% less particulate matter emissions than the buses they replaced.

“This was made possible by a partnership between Bustech and Tasmanian company, Elphinstone, as their manufacturing partner,” the Minister said.

“This resulted in 20 new direct advanced manufacturing jobs on the north west coast and more than 60 indirect jobs in Tasmania.

“On top of this, there were around 12 additional Tasmanian businesses involved in the build supply chain.”

Elphinstone Executive Director, Kelly Elphinstone said, “our collaboration with BusTech Group to manufacture and deliver these state-of-the-art buses in Tasmania has given us the opportunity to develop new skills and build on our advanced manufacturing capabilities, while also securing jobs for our local workforce.”