General Electric (GE) has been recognised for quite some time now as one of the leaders in additive manufacturing. The company has turned to 3D printing of end-use components and has achieved numerous milestones and breakthroughs.

Last Sunday, GE announced the development of another breakthrough, the process of 3D printing light-weight metal blades for jet engine turbines that are to be used in Boeing’s Dreamliner and 747-8 aircraft, as well as their upcoming GE9X engines.

Italian aerospace company Avio – which was acquired by GE last year and is now part of GE Aviation – together with Arcam from Sweden, developed the new technology which is a type of electron beam melting (EBM) in a bid to boost the manufacturing of parts made from an advanced aerospace material called titanium aluminide.

In the EBM® process fully dense metal components are built up, layer-by-layer of metal powder, melted by a powerful electron beam. Each layer is melted to the exact geometry defined by a CAD model.

The blades are built from a titanium powder fused with a beam of electrons accelerated by a 3-kilowatt electron gun which is 10 times more powerful than laser beams currently used for printing metal parts.

Thanks to this boost in power, Avio now build blades from layers of powder that are over four times thicker than those used by laser-powered 3D printers.

As a result, one machine can produce eight stage 7 blades for the low pressure turbine that goes inside the GEnx jet engine in just 72 hours.

“This is very competitive with casting, which is how we used to make them,” says Mauro Varetti, advanced manufacturing engineer at Avio.

The company plans to manufacture the turbines from titanium aluminide since it is 50% lighter than nickel-based alloys currently used in the production of turbine blades, thus reducing the weight of the entire low pressure turbine by 20%.

“Although the material is expensive, the weight savings and the fuel consumption savings tied to weight reduction more than pay for it,” Varetti says.

Titanium aluminide has a very high contraction ratio and can become fragile and prone to cracks as it cools, but the EBM printer provides a solution for all those issues.

“The printer builds parts directly from a 3D computer drawing by melting layers of fine powder with an electron beam. The technology allows workers to preheat the powder and better control the part’s properties. Engineers can also change the shape of the blades and print different blades on the same machine in a quick succession, which would be laborious and expensive with casting,” it says in the GE report.

The blades printed for the GEnx engine are scheduled for testing later this year. GE will test the blades at its test facility in Peebles, Ohio.

“The parts will also go inside the GE9X, a new jet engine GE is developing for Boeing’s next-generation long-haul plane, the 777X,” the company stated.

Last month, GE announced that it had started building a new factory for 3D printed jet engine fuel nozzles in Alabama and is also exploring numerous other options.

“The sky is the limit,” said Gregg Morris, who runs additive manufacturing programs at GE Aviation. 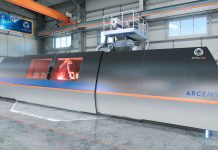 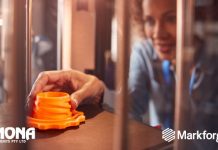