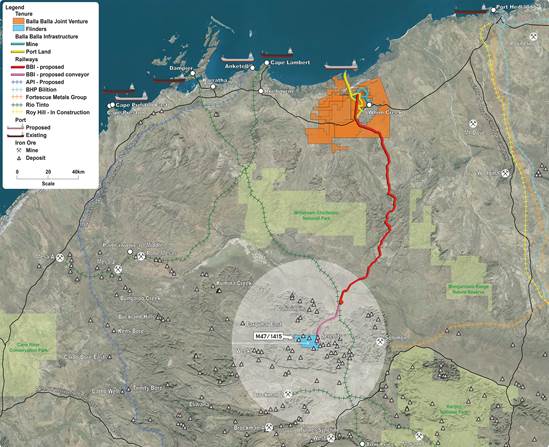 The WA State Government has ratified an agreement that will support the development of a massive integrated iron ore development in the Pilbara.

The Railway (BBI Rail Aus Pty Ltd) Agreement 2017 Bill, which was introduced into State Parliament on Wednesday, marks the first step towards the development of the $5.6 billion project agreed between the State and the Balla Balla Infrastructure Group (BBI) earlier this year.

BBI’s multi-billion project involves the construction of a new export facility on the Pilbara coast between Karratha and Port Hedland, with a 162-kilometre railway linking it to iron ore deposits in the central Pilbara

“I am pleased to introduce this State Agreement into State Parliament to facilitate this major project, which will generate jobs and economic activity for the central Pilbara,” Mr McGowan said.

“Balla Balla Infrastructure Group has committed to maximising local employment opportunities within the Pilbara, with plans to bus workers in from Karratha and other towns. The project plans to use custom-built, innovative barges to transfer ore from the port onto ships, which both reduces costs and the need for dredging.”

BBI Group’s Chair Jon Young said the company welcomed the support that the Project had received in Western Australia.

“The BBI Project will be a substantial job creator in both the construction and production phases,” Mr Young said.

“The introduction of the State Agreement bill into Parliament by Premier Mark McGowan is a key milestone for the BBI Project. It formalises BBIG’s commitment to provide employment, economic and social opportunities for Pilbara residents, including skills development and training opportunities to promote work readiness and employment, as well as WA local industry participation.”

If approved, the project is expected to create 3,300 construction jobs and 910 operational positions. The final investment decision for the project will be announced next year.