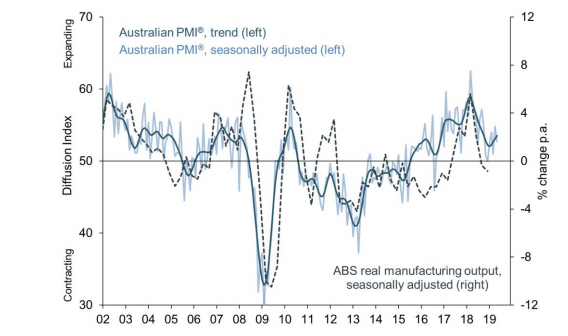 AI Group’s Australian Performance of Manufacturing Index (Australian PMI) remained in expansionary territory at 52.7 points in May, marking the thirty-third consecutive month of stability and reading over the 50-point mark.

Despite continuing its positive streak, the Australian PMI slipped down by 2.1 points from the previous month, indicating a slower rate of growth.

According to AI Group’s survey, five of the seven activity indexes in the Australian PMI indicated expanding conditions in May, while two indicated broadly stable conditions.

The report showed that three of the six manufacturing sectors expanded in May, led by food & beverages (up 1.8 points to 63.9 – its fastest rate on record) and building materials, wood & furniture (up 3.8 points to 62.0).

Both the metals products (down 0.3 points to 45.2) and machinery & equipment (down 0.9 points to 45.1) sectors contracted further in May, weighed down by slowing economic conditions.

Further, the input prices index climbed again in May (up 3.6 points to 68.3) after falling in the previous two months, with elevated energy prices cited as the largest concern for many manufacturers.

The selling prices index slipped by 2.8 points to 52.1 – indicating that prices for more manufactured goods went up but at a slower pace compared to April – while the average wages index declined by 2.2 points to 55.5 in May, indicating ongoing wage pressures across the manufacturing sector – but at its slowest rate since March 2017.

“While Australia’s manufacturing sector continued to grow in May, performance was mixed across the range of manufacturing industries and there are signs of further softening in the months ahead,” Mr Willox stated.

“Manufacturers are hoping that the resolution of political uncertainties associated with the election will provide a base for a return to more robust conditions. As one member put it in responding to the survey, ‘elections kill business‘. The medium-term outlook remains clouded by the prospect of uncompetitive prices for gas, both for direct industrial use and as a critical input into electricity generation.

“Momentum eased for production, sales, exports and new orders with at best moderate growth recorded in these sub-indices. While the large food & beverages sector continued to grow strongly, as did the building, wood, furniture & other products category, the important metals products and machinery & equipment sectors slipped further. The chemicals sector lifted modestly and the businesses in the textiles, clothing, paper & printing sector recorded a slight reduction in performance.”

Lion will not shut down iconic XXXX Brewery