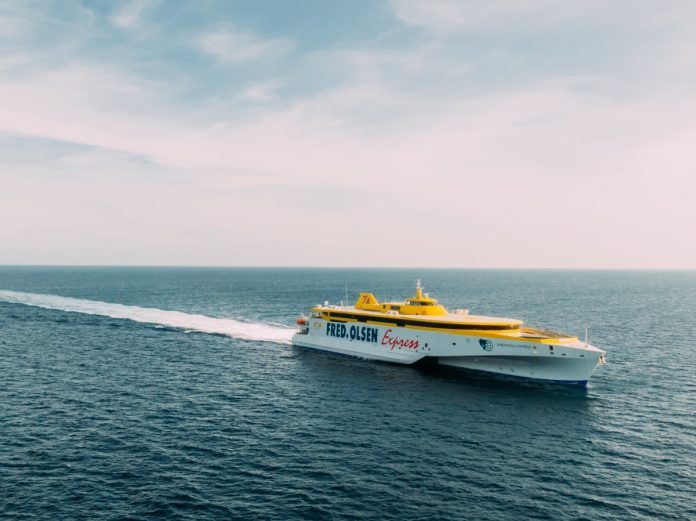 Austal said the delivery signals the completion of the A$190 million contract for two trimarans, which was announced in December 2018. The first vessel, Bajamar Express (Austal Hull 394) was constructed by Austal Australia and delivered in July 2020.

Austal’s CEO Paddy Gregg noted that Bañaderos Express – which features class-leading interior amenities and facilities, including multiple bars, kiosks, a retail shop and children’s play area – is capable of transporting 1,100 passengers and 276 cars at a cruising speed of over 37 knots.

He said the delivery of the vessel to Fred. Olsen Express highlighted the trimaran platform’s continued popularity with operators and Austal Philippines’ proven capability to deliver large, high quality vessels.

“Fred. Olsen Express was the world’s first ferry operator to see the unique value of the Austal trimaran hull to deliver a superior customer experience, operating the 127 metre Benchijigua Express since 2005. Now, with Bajamar Express and Bañaderos Express they have two more trimarans that further enhance their offering to customers and enable the world’s first dedicated trimaran service in the Canary Islands,” Mr Gregg continued.

“Our warmest congratulations go to Andrés Marín and the Fred. Olsen Express team on the delivery of their third trimaran and indeed, the fifth Austal high-speed ferry to join their fleet.

“With the handover of Bañaderos Express, Austal Philippines has again demonstrated their proven capability to safely and efficiently deliver multiple, large and complex vessels programs, to Austal’s renowned quality standards, even under the most challenging circumstances.”

Austal Philippines President and General Manager Wayne Murray thanked his team again for their commitment to safety and productivity in the delivery of Bañaderos Express during the challenging COVID-19 environment.

“Bañaderos Express is a real milestone for Austal Philippines as it is the 20th vessel constructed here at the Balamban shipyard since we opened in 2012. In just ten years our team have constructed 18 catamarans and two trimarans, including the two largest high-speed ferries ever built in the Philippines, for operators located around the world,” Mr Murray said.

“This delivery of Bañaderos Express is even more significant, given the challenging COVID-19 environment in which we have operated over the past two years. Austal Philippines has successfully maintained productivity, while keeping our team safe during the pandemic.”

Manufacturers must have COVID-19 strategies in place to safeguard the health of their workers,...