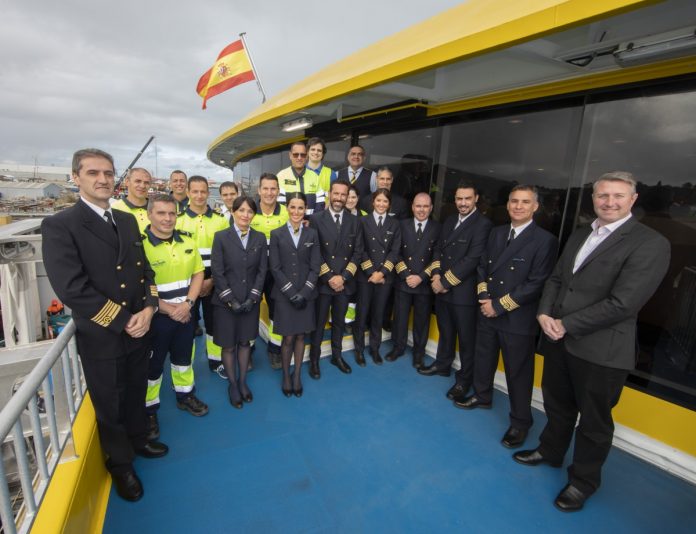 Austal Australia has delivered the first of two 118-metre trimarans to Fred. Olsen Express as part of the A$190 million contract signed in October 2017.

The 118-metre high-speed trimaran ferry, which was delivered at a ceremony held at the Company’s shipyard in Henderson, WA, is capable of transporting 1,100 passengers and 276 cars at a cruising speed of more than 37 knots.

Austal Chief Operating Officer Patrick Gregg said the Bajamar Express was the second trimaran to be delivered to Fred. Olsen Express and the 4th Austal vessel to join the Fred. Olsen fleet.

“Fred. Olsen Express recognised the enormous potential of the trimaran hull form for high-speed craft and engaged Austal to develop the original and still the largest trimaran ferry operating in the world, the 127 metre Benchijigua Express,” Mr Gregg said.

“Based on that ship’s success, Fred. Olsen Express ordered two more trimarans in 2017 and today we celebrate the first of these vessels to be delivered.”

“Bajamar Express joins Benchijigua Express plus two Austal-built catamarans already operating in the Fred. Olsen fleet, the Bocayna Express and Betancuria Express. When the Bañaderos Express is delivered in 2021, Fred. Olsen Express will be operating five Austal vessels, including 3 trimarans.”

The second vessel, Bañaderos Express, is currently under construction at Austal Philippines’ shipyard and is scheduled for delivery in the first half of 2021.