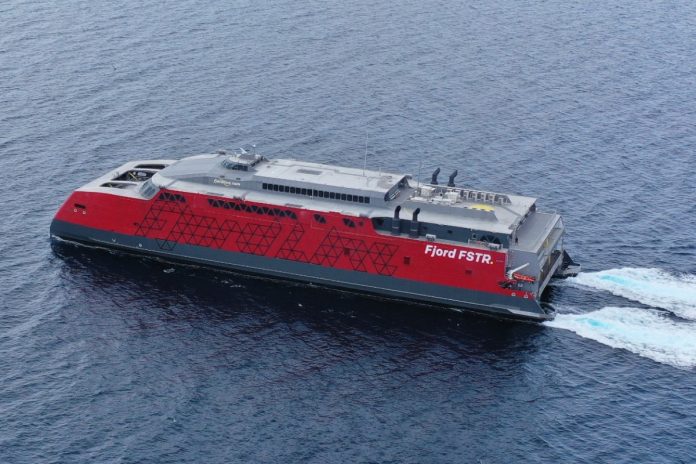 Austal Philippines has successfully delivered a 109 metre high-speed catamaran ferry, the largest ferry (by volume) to be constructed at any of Austal’s shipyards worldwide.

Named FSTR, the passenger ferry was delivered to Fjord Line of Norway at a handover held at the Balamban Cebu shipyard.

Capable of transporting 1,200 passengers at up to 40 knots, the vessel features Austal’s largest ever vehicle-carrying capacity constructed to date, with a beam of 30.5 metres enabling 404 cars to be carried across two decks.

It also boasts several key design innovations that enhance operating performance and passenger comfort, including a new, optimised hull form that will minimise fuel consumption and wake wash when operating on the Skagerrak Sea between Hirtshals, Denmark and Kristiansand, Norway.

Austal CEO Paddy Gregg said the delivery of FSTR was a significant achievement and a testament to the resilience, commitment, skills and safety of the Austal Philippines team.

“It’s impressive to see a large high speed ferry like this delivered in the best of times, but for the team to deliver this new vessel during a global pandemic is simply outstanding,” he continued.

“The Austal Philippines team has clearly demonstrated its ability to deliver multiple, complex projects under challenging circumstances, while maintaining a safe working environment.

“My congratulations go to the entire Austal Philippines team and Fjord Line on the delivery of this exciting new ship, the largest high-speed ferry ever constructed in the Philippines.”

Austal Philippines President Wayne Murray noted that FSTR was ‘just the first of three’ large high-speed ferries to be constructed at the company’s newly expanded shipyard.

“With the delivery of FSTR, we’re now preparing for the launch of Hull 395, Bañaderos Express; a 118 metre trimaran ferry under construction for Fred. Olsen Express of the Canary Islands,” Mr Murray said.

“Following closely behind that, we have the 115 metre Express 5 under construction for Molslinjen of Denmark.

“And soon, we will do it again, when we complete Express 5 for Molslinjen. We are indeed a record setting and record breaking shipyard,” he concluded.