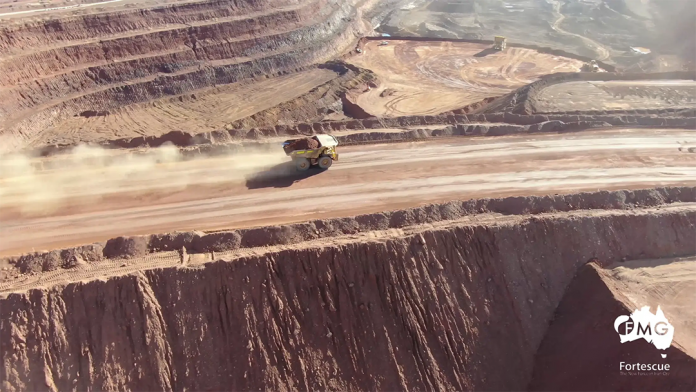 Fortescue, which began its journey to develop leading autonomy capability in 2012, will roll out a total of 38 autonomous trucks at Cloudbreak as part of its plans to become the first iron ore operation in the world to have a fully autonomous haulage fleet.

The company, whose  fleet of autonomous trucks has safely travelled over 28 million kilometres and has moved over 860 million tonnes of material, said the conversion of its fleet to autonomy across all its mine sites in the Pilbara will see 175 trucks fitted with AHS by mid-2020.

In a world first, Fortescue retrofitted Cat Command for hauling, part of Caterpillar’s MineStar technology, on Komatsu 930E haul trucks at Christmas Creek. The 930Es have been operating alongside the Cat 789Ds since November 2018, demonstrating the Company’s capability to manage and operate the first multi-class truck size autonomous haulage site in the industry.

CEO Elizabeth Gaines described the undertaking as ‘the largest mining technology program in the industry’.

“Our approach to autonomy is to be open and transparent with our plans and to work closely with our team members to offer opportunities for re-training and re-deployment,” she continued.

“Around 3000 Fortescue team members have been trained to work with autonomous haulage, including over 200 people trained as Mine Controllers and AHS system professionals. This ensures Fortescue remains transformational and leads to higher skilled workers and jobs.

The rollout of AHS at Cloudbreak also made this remote mining operation the world’s first to use the Cat MineStar Command system in production mode.

Ms Gaines said this required the transfer of 160 pieces of machinery to the Cat MineStar Command remote operations server.

“Our remote operations centre located in Perth is a critical part of our integrated supply chain and key to increasing productivity and efficiency across our operations,” she explained.

Fortescue’s Cloudbreak mine site is also home to the five-kilometre relocatable conveyor which includes two semi-mobile primary crushing stations and feeds directly into the Cloudbreak ore processing facility (OPF). In another example of the company’s innovative operations, the infrastructure can be positioned approximate to pits and relocated, extended or shortened once an area is mined.

“Together with the eleven autonomous drills currently operating across sites and the relocatable conveyor at Cloudbreak, our autonomous operations continue to deliver significant benefits to the business,” Ms Gaines concluded.

Rio Tinto to sell Hail Creek and Valeria to Glencore for $1.7bn