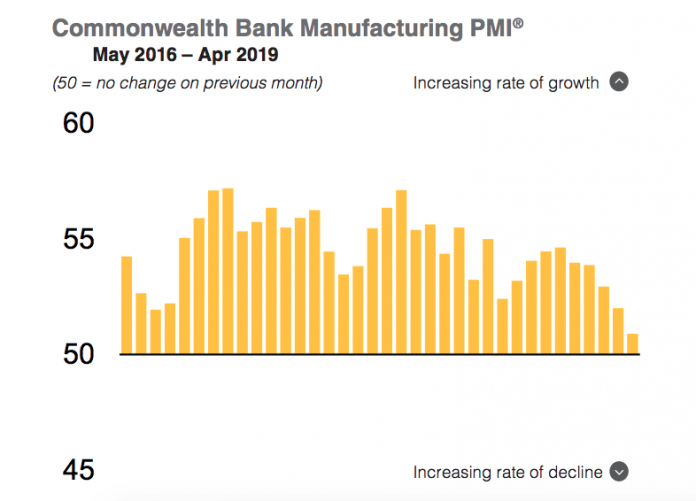 CBA’s Manufacturing Purchasing Managers’ Index (PMI) for April showed that the slowdown in Australia’s manufacturing sector gained momentum at the start of the second quarter, with the headline index sinking to its lowest level in three-year survey history.

The headline index from the survey, the seasonally adjusted PMI, slipped to 50.9 in April from 52.0 in March, dragged down by lower output and markedly slower order book growth.

“Production volumes fell for the first time in the survey history during April, alongside a notable slowdown in order book growth,” reads CBA’s report.

“Consequently, the level of unfinished work dropped, ending an eight-month period of increase.”

The survey also found that employment was stagnant, while firms cut back on purchasing activity for the first time since the series inception.

“The presence of spare capacity saw firms reluctant to take on more workers, with net factory employment remaining unchanged in April,” it says in the report.

“Softer demand conditions pushed firms to trim purchasing activity. The survey registered the first decline in input purchases in the series history which, in turn, contributed to a slower rise in input inventories. Stocks of finished goods fell and at the steepest rate since the survey began in May 2016.”

The report also notes that cost pressures intensified and business confidence was the second-lowest on record.

“Input price inflation intensified and was marked overall during April. Anecdotal evidence suggested that suppliers’ price hikes and greater costs for raw materials such as steel, paper and fuel contributed to increased expenses.”

“Finally, business confidence remained positive in April, although the Future Output Index slipped to its second-lowest level in the survey history.”

The future of Australian manufacturing relies on support of younger generation, according to report