In a momentous partnership for advanced manufacturing in Australia, the Northern Territory Government and Australian company, Amphibian Aerospace Industries (AAI) have joined forces to launch a new aircraft manufacturing industry in Darwin.

A modernised version of the legendary Albatross flying boat will be manufactured in Darwin and will feature digital avionics and state of the art turboprop engines from the world’s leading aircraft engine manufacturer, Pratt and Whitney.

Today’s announcement by Northern Territory Chief Minister Michael Gunner is the culmination of years of planning by Amphibian Aerospace Industries and has been facilitated by the Northern Territory Government in a strategic and visionary partnership that will help to establish Darwin as Australia’s advanced manufacturing hub.

AAI Chairman Khoa Hoang praised the vision of the Northern Territory Government in recognising the extraordinary global market potential of the new G-111T Albatross and the role it will play in reviving Australia’s aircraft manufacturing industry.

“Chief Minister Gunner has shared our vision that the G-111T Albatross is an incredible aircraft of great and practical use to humanity, whether for registered passenger transport, humanitarian assistance, search and rescue, freight, coastal surveillance, drug enforcement or a host of other roles.

“Today’s announcement is just the beginning as we are already working on next generation technologies to produce new variants such as the Zero Emissions-Hybrid powered Albatross and even a stretched 44 seat variant,” Khoa said.

Since acquiring the Albatross type certificate several years ago, AAI has been assembling a world class team to help make the new manufacturing industry a reality.

“We are proud to have chosen Pratt and Whitney, the number one power-plant manufacturer in the world to power the Albatross with their PT6A-67F engine. This iconic company has shared our vision from the beginning and I extend special thanks to the Pratt and Whitney Canada team including Frank Nel and VP Business Development, Anthony Rossi,” Khoa said.

“We have also uncovered a lot of smart people with incredible expertise here in our own country.  Companies like Heat Treatment Australia and Nupress Group which are involved in making the landing gear for the F35 Fighter and we have earmarked them to make the Albatross landing gear. Also, our own subsidiary 5 Rings Aerospace working with the Australian Stroke Alliance and RMIT University to design an aeromedical installation.”

“The global market for the Albatross G-111T is enormous and it holds a monopoly in its class. It doesn’t compete with larger passenger aircraft, instead it compliments them which is why it’s the perfect platform to build in Australia and rekindle our sovereign aircraft manufacturing capability,” Khoa said.

“There are many people to thank for achieving this milestone today but I must particularly acknowledge the tireless efforts of our CEO Dan Webster, Northern Territory Investment Commissioner Andy Cowan, Major Project Commissioner Jason Schoolmeester and the Investment Territory team, and the Darwin International Airport team, all of whom have applied highly professional due diligence to get this done.

“There is much hard work still to be done to deliver our vision but I know the team we are building will deliver a program of immense social and economic benefit to the people of the Northern Territory and Australia.

“We can’t wait to deliver the first G-111T Albatross – made in the Northern Territory”. 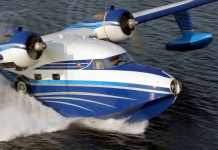