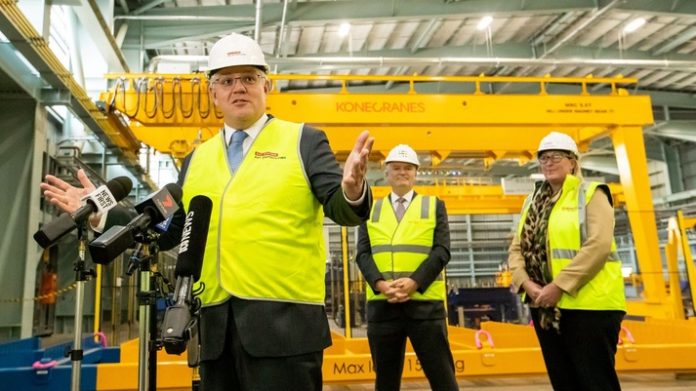 BAE Systems’ subsidiary ASC Shipbuilding is in the final stages taking control of the Osborne South Naval Shipyard, which is now complete and on track to commence the $45 billion Hunter Class Frigate program.

The Hunter Class Frigate program will deliver nine anti-submarine warfare frigates to the RAN, using a digital environment for the design and build of the ships made possible at the new shipyard.

Over the next four months, ASC Shipbuilding will start training their shipbuilders on the technology that has been installed for building warships efficiently and effectively.

The company, which has been given the green light to commence prototyping in December 2020, will gradually accept and commission the buildings in the lead up to the prototyping phase, before construction begins on the first Hunter class frigate in 2022.

Prime Minister Scott Morrison, who visited the $535 million shipyard on Saturday, said the new Frigate program was expected to create around 2.500 direct jobs.

“Our continuous naval shipbuilding program has changed the skyline at Osborne on the Port Adelaide River but importantly it’s delivering thousands of local jobs while boosting the economy and strengthening Australia’s defence capability,” the Prime Minister added.

“Founded on a $535 million investment by the Australian Government, Osborne South is now a worldleading shipyard where Australian steel comes in at one end, and state-of-the-art warships come out at the other.”

BAE Systems Australia Chief Executive Officer Gabby Costigan said the Hunter class frigate program was significant to both the defence of the nation, and the contribution it would make to the Australian economy.

“Today’s visit by the Prime Minister was important in demonstrating how despite the challenging environment we are working in as a result of the COVID-19 pandemic, work on Hunter has not stopped,” Ms Costigan continued.

“We now have the go-ahead to proceed towards cut steel on the prototyping phase of Hunter, and this will proceed in December, as planned, allowing us to continue to hire more Australians and sign contracts with more Australian businesses.”

“More than 25,000 tonnes of steel, of which over 85 per cent was locally made here in SA, was used during the build,” the Minister noted.

“At peak construction, more than 730 people worked on this project, with 97 per cent of contracts let to Australian businesses, making this a truly sovereign project.