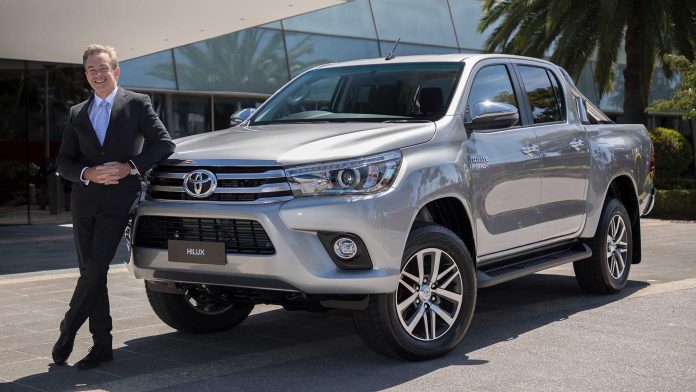 Toyota’s HiLux has topped the sales charts as Australia’s best-selling vehicle for the second year in a row, helping the Japanese carmaker deliver its best sales in the country in five years.

The result marked the 21st time Toyota has led the Australian new-vehicle market, and the 13th time the brand has sold more than 200,000 vehicles locally in a calendar year.

HiLux, with 47,093 sales, notched up a 20th consecutive year as Australia’s top-selling commercial vehicle, while the ever-green Toyota Corolla – which celebrated 50 years in local showrooms last year – was Australia’s best-selling passenger car for the fifth year in a row with 37,353 sales.

Camry was Australia’s best-selling mid-size car for the 24th year in a row with 23,620 deliveries, with LandCruiser Prado, LandCruiser wagon, HiAce van and HiAce representing Toyota’s other segment leaders.

“Toyota and the industry have increased sales in each of the past three years and, in 2017, we both achieved all-time records for SUVs and LCVs,” Mr Callachor said.

“Records also tumbled for LCVs with Toyota reaching 66,034 sales and the industry exceeding 236,600 sales. Led by HiLux, Toyota increased its market share in this category by almost a full percentage point.”

Revolutionary wearable medical product to be manufactured in Queensland