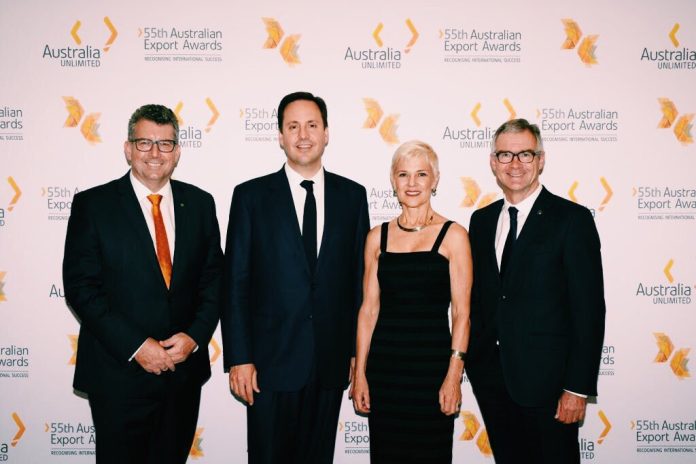 Ego Pharmaceuticals is one of four Victorian companies that have won national awards at the 55th Australian Export Awards, one of the country’s most prestigious and longest-running business awards.

The privately owned skin care company, which was named Australian Exporter of the Year, also won the Manufacturing category.

It researches, manufactures and markets over 120 products including QV Skincare, SunSense sunscreen, Aqium Hand Sanitiser and Pinetarsol, all of which are available in 27 countries, including China.

Victoria’s Yumbah Aquaculture, Envato, Deakin University and Leica Biosystems were also named national category winners at the awards ceremony which was hosted by Minister for Trade, Tourism and Investment Steven Ciobo in Canberra.

Yumbah Aquaculture – a geographically diverse company focused on growing premium Greenlip abalone – has been named winner of the Agribusiness Award.

Founded in 1999, the company is responsible for the entire production chain from breeding, aqua-feed production, marketing and distribution, and is the largest abalone producer in the Southern Hemisphere.

It supplies approximately 60% of the total 1,000 mega-tonnes of cultured Abalone produced in Australia.

Envato – a creative ecosystem of sites and services for digital assets and creative people – has won the Creative Industries Award.

A global community of more than 7 million creatives use Envato Market to download assets such as website themes, audio tracks and animations.

It employs more than 200 people at its Melbourne head office and 100 remote workers in 25 countries.

Deakin University, which was founded 40 years ago, has won the Education and Training Award. Starting out as a modest regional institution, the University gradually transformed into one of the world’s leading young universities, increasing its annual revenue from international students from $143 million in 2013 to $196 million in 2016.

Deakin was one the first Australian universities to open international offices, and has research and teaching partnerships in over 100 countries.

Medical device company Leica Biosystems has won the Health and Biotechnology award. Based in Melbourne, Leica produces three of the most recognised and reliable cancer diagnostic instruments, which are being exported and sold to 65 countries around the world.

The company is also a global leader in workflow solutions and the only firm on the market providing instruments used from biopsy to diagnosis.

This year’s edition of the Australian Export Awards produced twelve national winners selected from 77 finalists, who together generated $3.9 billion in export earnings during 2016-2017 and employed 31,000 people.

Finalists were primarily small to medium-sized enterprises across a diverse range of industries.