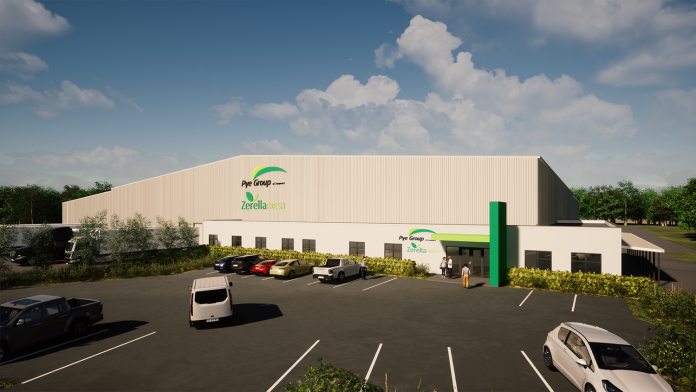 The Pye Group’s multi-million-dollar investment in its Parilla Premium Potatoes and Zerella Fresh brands will help feed growing demand for potatoes in Australia. It will inject an estimated $42 million into the regional Mallee economy and create 40 new local jobs.

Pye Group Director, Mark Pye, said the new washing and packing facility at Parilla will double the production capacity of the company’s existing Virginia potato packing facility in the heart of the market garden district north of metropolitan Adelaide. That facility each year washes and packs over 50,000 tonnes of potatoes for delivery in South Australia, Queensland, Victoria, New South Wales, Northern Territory and Australian Capital Territory.

“The new packing facility will feature the best available optical grading and automated packing technology to revolutionise the way in which we process potatoes,” said Mr Pye.

“The new Parilla facility will ensure the best possible quality controls and minimise waste. It is 260 kilometres and three hours closer by road to our Eastern states customers and offers faster delivery.

“Additionally, there will be 70 less B-Double trucks travelling between the Mallee region and Virginia each week reducing greenhouse emissions.”

Minister for Primary Industries and Regional Development David Basham said, “This $12 million from the Regional Growth Fund will unlock nearly $70 million of investment in South Australia’s economy – creating more than 1,000 jobs across the state.

“Our regions are a key driver for the South Australian economy and this will provide a much-needed shot in the arm to help business bounce back as quickly as possible.”

Zerella Fresh, which is known for its innovation including its popular Spud Lite potatoes, plans to transform its Virginia plant into a new food innovation hub to meet its strategy to diversify the business and continually reduce waste.

The potato packing facility is scheduled to be complete by mid-2021.