Alcoa Corp. announced that it will permanently close the Suralco alumina refinery and bauxite mines in Suriname which have been fully curtailed since November 2015.

The company said it was working with the Government of Suriname to develop definitive agreements concerning Suralco’s remaining activities in the country and the future of the bauxite industry in Suriname.

Pending the outcome of these agreements, Alcoa said it will continue to operate the Afobaka hydroelectric facility, which supplied power to the Suralco operations.

“We are working in partnership with the Government of the Republic of Suriname to reach the best possible solution that would enable Suriname to maintain its bauxite industry. Dialogue is ongoing and progress is being made,” said Alcoa’s CEO Roy Harvey.

“As we enter 2017, we also continue to streamline and strengthen our portfolio to better focus on our businesses and the growth opportunities ahead.”

Alcoa said the permanent closure of the mines and refinery will result in $90 million in restructuring-related charges, after-tax and noncontrolling interest in the 2016 fourth quarter. The company’s share of total cash costs associated with the closure, inclusive of prior accruals, are estimated to be $151 million over five years, with $24 million to be spent in 2017.

It comes after AofA determined that the completed exploration activities do not support the current carrying value.

Alcoa also announced that the recent power outage at the Portland Aluminum smelter in Victoria was “not expected to have a significant unfavourable impact” on fourth quarter results.

AofA and Suralco are part of the Alcoa World Alumina and Chemicals (AWAC) group of companies owned 60% by Alcoa and 40% by Alumina Limited.

The AWAC partnership agreements between the two companies provide for the allocation of certain liabilities occurring prior to AWAC’s formation on January 1, 1995 according to a party’s preformation ownership interest.

“While Alcoa and Alumina Limited are currently in the process of allocating AWAC’s Suralco-related costs and liabilities in accordance with those provisions, the recorded charges represent Alcoa’s view of the liabilities at the present time,” the company said in a press release. 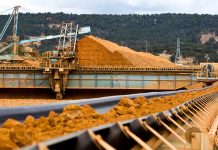 Alcoa set to sell stake in DBP to Duet Group