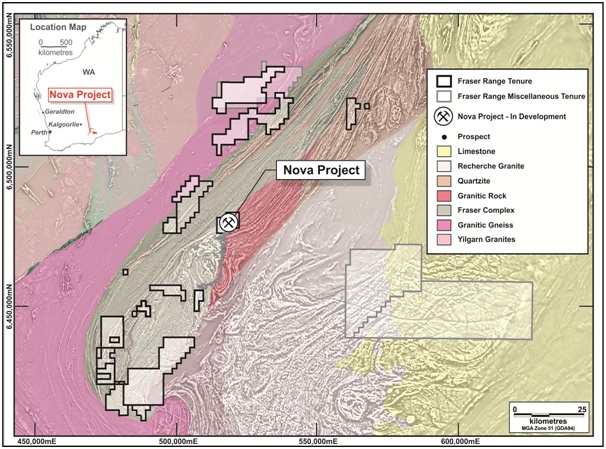 Independence Group (IGO) has officially opened its A$456 million Nova nickel-copper-cobalt operation in the Fraser Range province in Western Australia.

Located 360 kilometres south-east of Kalgoorlie-Boulder, the Nova operation advanced from a greenfield exploration discovery to commercial production just five years after its discovery in 2012.

The world-class, low-cost mine – which is expected to have a mine life of 10 years – will produce some 25,000 tonnes of nickel, 11,000 tonnes of copper and 925 tonnes of cobalt in concentrate during its maiden year of commercial production.

Speaking at the official opening ceremony on site at Nova, the company’s Managing Director and CEO Robert Bradford said the mine was expected to reach nameplate capacity twelve months earlier than expected in the bankable feasibility study thanks the quality of the project and the teams involved.

“I would like to thank the many contributors to the exploration and development of Nova and to reiterate IGO’s commitment to delivering long term value to all our stakeholders, especially our local communities,” Mr Bradford said.

“Our people, whether employed directly by IGO or our contractor partners, are the lifeblood of IGO and it is through their focus, commitment and hard work that Nova has been delivered to commercial production within five years of when the Sirius exploration team, led by Mark Bennett, drilled that now-famous discovery hole back in July 2012.”

“On behalf of the McGowan Government, I congratulate all Independence Group staff, project partners, stakeholders and the Ngadju people, on the official opening of Nova,” the Minister added.

“We are proud to have played a part in successfully bringing the project to life, the first diamond drill hole at Nova received co-funding from the Exploration Incentive Scheme. Production commencing at Nova is excellent news for the mining sector, especially as this is the first mine of its scale in the highly prospective Fraser Range.”

drjoseph - March 17, 2015
Dr Joseph Sgroi aim is to assist women and couples to become pregnant and support them throughout pregnancy and childbirth. As part of this...