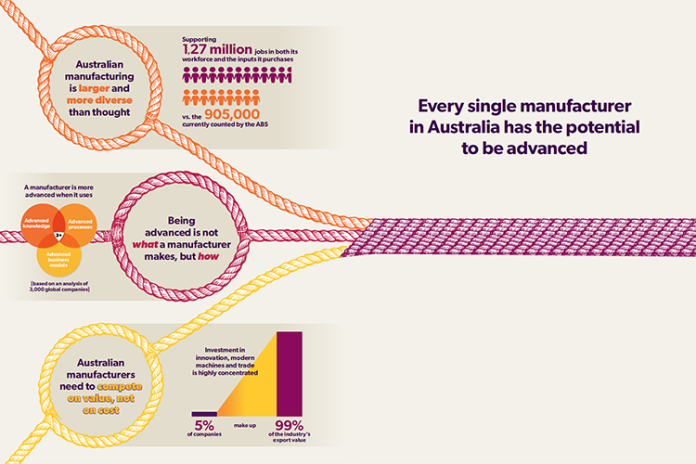 Australia’s manufacturing industry is ‘larger and more dynamic’ than currently estimated, according to a report commissioned by the Australian Manufacturing Growth Centre (AMGC).

It reveals that only 5% of firms drive 99% of total manufacturing exports, 94% of capital spending and 54% of the sector’s entire research and development.

“Manufacturing is transforming, so we need a new definition to accurately measure who we are and where we need to go. Our research presents a real opportunity for Australian manufacturers. It shows that we have huge growth potential if we can emulate and adopt the advanced manufacturing characteristics unveiled in this report,” Mr Goennemann noted.

“Australia’s manufacturing exports generate close to $9 billion every month so just imagine what the possibilities could be if we increased the number of firms contributing to economic output by even 5 or 10%.”

According to data from the Australian Bureau of Statistics, Australia’s manufacturing sector directly supports 905,000 jobs across the country. The new definition would see this number rise to almost 1.3 million if indirect workers that supply R&D, design, logistics or services to manufacturers are included.

“Our research shows that almost half of all manufacturing jobs are in non-production based roles,” Dr Goennemann continued.

“Being a successful advanced manufacturer is no longer just about what you make but how you make it and the way you run your business.”

Additionally, the report contains specific recommendations for government including policy, regulatory and funding, and also outlines three key characteristics of advanced manufacturers, as a blueprint for local organisations in the industry to emulate:

– Advanced knowledge: Innovation leaders that score highly on measures such as R&D spending, ICT use and number of patents.

– Advanced processes: Process winners that make smarter use of technology, scoring highly on capital intensity, use of automation, energy and water efficiency, and new equipment.

– Advanced business models: Act as niche market players, scoring highly on measures such as trade intensity, linkages with other firms and greater share of services in total revenue.

“The AMGC is now calling on the government to apply new statistics to track whether Australian manufacturers are advancing and to change how manufacturing output and jobs growth are measured in Australia,” Dr Goennemann concluded.