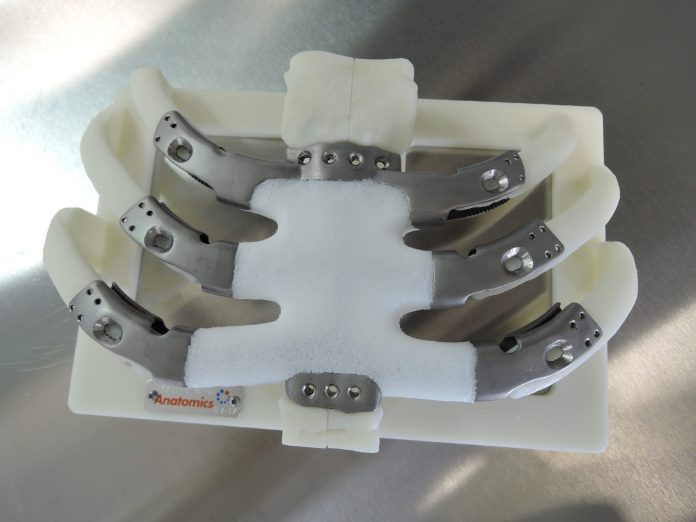 The CSIRO-Anatomics partnership has led to the first successful implantation of a 3D printed titanium and polymer sternal and rib cage in a New York patient.

In 2014, the patient was diagnosed with a rare form of bone cancer, which caused surgeons to remove her cancer affected sternum.

They then fashioned a replacement sternum and ribcage using off-the-shelf solutions. However, while the procedure effectively removed the cancer, ongoing pain and breathing problems made post-op life unpleasant.

Earlier this year, the 20-year old patient was subjected to further surgery to replace her implant with a customised sternum and partial ribcage made from 3D printed titanium and combined with Anatomics’ ‘PoreStar’ technology, a unique porous polyethylene material providing “bone-like” architecture to facilitate tissue integration.

It was the first time the technology was used in the US and only the second time in the world that a 3D-printed composite sternum and ribcage was implanted in a patient.

CSIRO’s Director of Manufacturing Dr Keith McLean said the operation marked another world first for the two parties, which produced the world’s first sternum and rib cage prosthetics for a cancer patient in Spain in 2015, and another for a British man who received the implant in 2016.

“I’m proud of our work with Anatomics that has enabled patients around the world to lead normal lives,” Dr McLean said.

Anatomics Executive Chairman Dr Paul D’Urso said the company’s technology has helped thousands of patients in Europe, Australia and now the US over the past 25 years.

“Anatomics’ advanced capabilities in personalised healthcare have opened new doors for patients in need of implants that are customised for them rather than having to use mass produced ‘off-the-shelf’ devices that don’t fit as well.”

Companies in research partnerships are more innovative and resilient, so why aren’t there more?