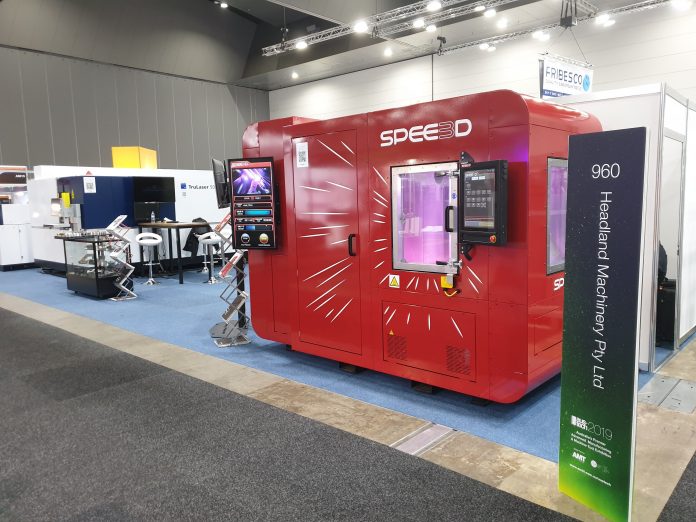 Capable of delivering manufacturing grade printing at production speeds, SPEE3D’s industrial printers are fast and easy to install, often installed and printing metal parts in less than a day.

In three weeks, SPEE3D installed five world-leading industrial printers around the globe, with one located at Swinburne University in Melbourne and another featured at the Australian National Manufacturing Week.

Internationally, a WarpSPEE3D printer has been added to the FIT print bureau in Germany, as well as at Rapid TCT in Detroit and the University of Delaware.

Larry (LJ) Holmes, the Assistant Director of the Digital Design and Additive Manufacturing, Centre for Composite Materials, at the University of Delaware was quick to praise SPEE3D’s industrial printer.

“The LightSPEE3D printer we had installed is running great,” Mr Holmes said.

“It’s also easy to operate, SPEE3D trained one of our staff who was then able to train other operators. The team are now using the machine every day.”

PEE3D Co-founder and CEO Byron Kennedy noted that while the machine allows operators to print industrial quality metal parts in just minutes, it’s the speed of international installation that shows this Aussie company has shifted into top gear.

“ Typically, 3D printers of this size and complexity require up to two weeks to install and set up, however SPEE3D printers can be installed in a matter of hours,” Mr Kennedy said.

We’ve had machines delivered at 9am and printing parts by lunch time.”

According to the company’s media statement, entries are open until July 31, 2019.