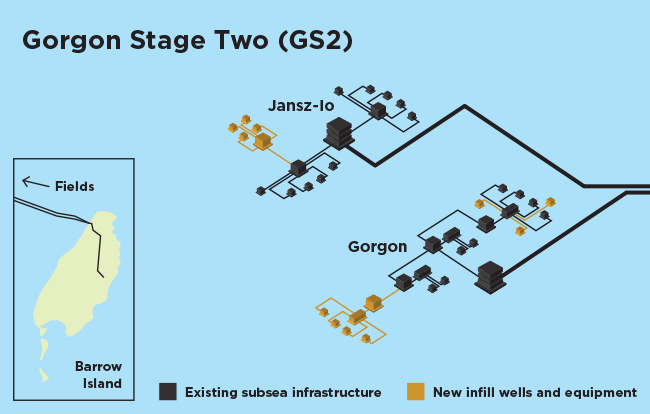 Chevron Australia and its joint venture partners have decided to proceed with future offshore development at the Chevron-led Gorgon natural gas facility off the northwest coast of Western Australia.

WA Premier Mark McGowan has welcomed the news, saying the move will provide continued domestic gas supplies, hundreds of new jobs and a major boost to the State’s economy.

“I congratulate Chevron Australia on this next development phase at the Gorgon project, which will undoubtedly provide hundreds of new jobs for Western Australians,” Mr McGowan said.

“This is a major State-building project that will deliver a significant boost to our economy.”

The Gorgon Stage Two Project (GS2) is part of the original development plan for Gorgon and includes the expansion of the subsea gas gathering network required to maintain long-term natural gas supply to the 15.6 million tonne per annum (MTPA) LNG plant and domestic gas plant on Barrow Island.

“Our world-class natural gas facilities have transformed Chevron into a leading and reliable supplier of cleaner-burning natural gas to customers in the region,” Mr Hearne stated.

“Through ongoing collaboration, we need to invest in both the infrastructure and the local skills and capability required to maintain our long-term energy position and contribute to the jobs of the future.”

Premier McGowan said the project is expected to create hundreds of jobs over several years in areas including drilling, subsea installation, pipe-laying and project management as well as ongoing operational jobs into the future.

“The Gorgon project off the North-West coast is one of the biggest resources projects in Australia’s history, delivering jobs to thousands of WA workers and big benefits to the wider economy,” he added.

“The GS2 development represents an exciting phase of what has been a WA success story, and is another sign that the State’s economy is turning the corner.”