Dotz Nano Limited, a nano-technology company focusing on the development, manufacturing, and commercialisation of graphene quantum dots (GQDs), recently announced it has successfully developed a process that extends GQDs tagging technology to petroleum and fuel products.

According to the release, GQDs will be used as a taggant in fuel and petroleum anti-counterfeiting activities through a patent pending method, for them not to be easily “laundered” or “washed out” from the fuel.

“Our latest development allows Dotz Nano to implement our tagging technology to the fuel additive market that is a major focus for several anti-counterfeiting/brand protection companies that Dotz Nano is collaborating with,” said Dotz Nano’s CEO Dr. Moti Gross.

“The petroleum and fuel marker market is a multi-billion, very lucrative and growing market with first tier players such as BASF, SICPA and Authentix participating in the sector. Dotz Nano is collaborating with several of them for the implementation of our GQD technology into the fuel authentication market.”

Further, the Company has successfully achieved an important milestone in their anti-counterfeiting/brand protection application focus, with the tagging of petroleum and fuel derivatives, such as gasoline, diesel and kerosene.

Dr. Gross also discussed the global issue on fuel theft, stating: “The high price and high rate of taxation on fuel makes it an attractive target for theft, particularly within a company that has private fuel storage. Companies and governments globally are looking for the right solution to decrease the high level of fuel theft. Most fuel markers are dye based and can be laundered out of the fuel.”

“Our technology makes it much harder to launder the taggant and as such GQDs can be the solution for this application,” he concluded.

Dotz Nano looks forward to notifying its shareholders on the progression of the commercialisation efforts in the future. 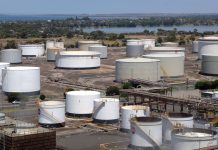