Holden has selected a buyer for its Elizabeth manufacturing plant in Adelaide following a six-month Expression of Interest process.

The departing car maker said the move paved the way for the development of one of Australia’s largest strategically positioned business hubs, but did not disclose the name of the selected purchaser.

Holden’s Executive Director of Manufacturing, Richard Phillips, said the company intends to retain a presence across ‘a significant portion’ of the site with a spare parts operation, adding that there was also interest from other major occupiers looking to secure commercial accommodation at the plant.

“A preferred investor/developer from interstate has been identified for the property based on their long-term investment strategy. They have a good performance record and ability to deliver a high-quality outcome, with a willingness to work with local authorities and the community,” Mr Phillips said.

“The site is to be transformed into a master-planned, innovative business park, providing employment opportunities for new and established industries such as resources, engineering, logistics, construction, defence, food & beverage and sales from both the local, national and international market. Renewable energies will be part of the masterplan.”

Holden said the name of the purchaser, along with further details, will be announced once the contracts are finalised.

The decommissioning process of the site will extend to mid-2019. 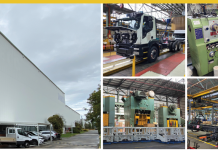