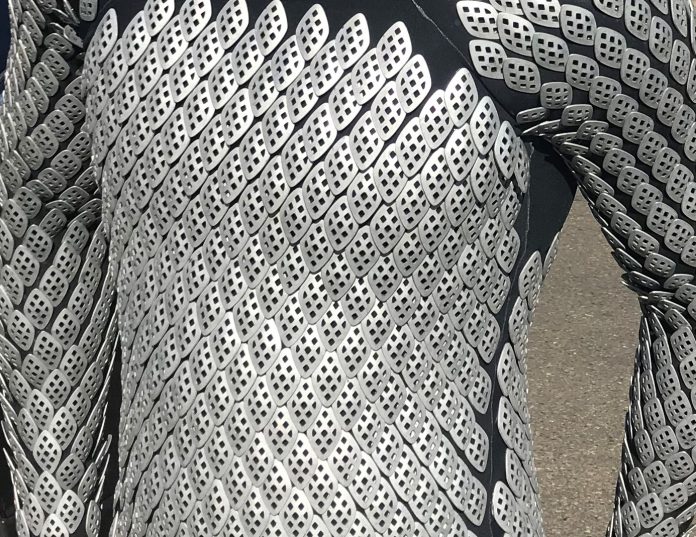 Sydney-based manufacturer Sevaan Group has been approached by Australian innovators ironskinn to assist in the roll out of an armoured wetsuit for protecting commercial divers, SCUBA divers, free divers and those into serious spear fishing.

Made of extremely tough aluminium platelets held together by an elastic in-form setting, the ironskinn dive suit is designed to protect divers from a wide range of marine hazards such as an unexpected shark bite, oysters, mussels, barnacles and rotten metal from boats when working on them underwater.

The platelets are rated as being harder than shark teeth, which means that an individual wearing the Ironskinn would likely sustain a scratch rather than a lost limb in the event of a bite from a regular sized shark.

ironskinn Managing Director Mr John Sundnes said Sevaan Group was handpicked ahead of ‘sizeable international competition’ for a number of different reasons, with one being its ability to interpret the requirements and set up CAD and manufacturing sequences to make the concept a physical reality.

“We are making the entire suit in NSW, so Sevaan’s Sydney base was a good start and ultimately as a company they showed patience as this was something that was never made before,” said Mr Sundnes.

“A lot of fine tuning was required and they were up for it; unlike other companies we approached whose attitude was ‘when you have a need for 100-offs then call us’.

“It took probably 4-5 months because we had some tooling we needed made and Sevaan Group had good contacts to make that tooling a reality.”

“The platelets have a particular shape and particular curvature; thin metal can behave in unexpected ways so that part may come out a little differently compared to its CAD so we needed expertise to handle that.”

Sevaan Group Managing Director, Mr Jim Tzakos, said they initially analysed and provided costings for the prototype manufacture, and then proceeded to come up with a new design at a particular price point.

“But a key designed principle was that the platelets are made so the suit doesn’t get in the way of kinetic movement of humans in the elbows, knees, hips etc.,” Mr Tzakos noted.

Mr Sundnes said Sevaan Group has been the perfect partner to help get the product over the line.

“What we are making also needs a high degree of quality because if it is made wrongly it just won’t work.

“All in all, we achieved a quality result and extremely good protection of our brand.”

The suit is currently on a pilot program with some professional divers before going for commercial sale.