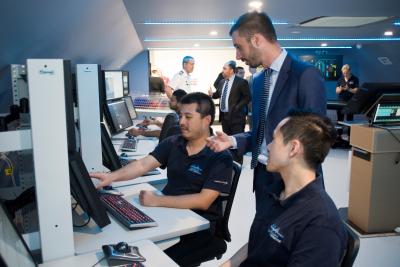 Lockheed Martin Australia (LMA) has announced research and development (R&D) seeding grants for an investment in excess of $900,000 in local academic and industry partners to develop advanced technologies for the Future Submarine Program.

The R&D grant recipients, which include Acacia Research, L3 Ocean Systems, L3 Oceania, Flinders University, University of Melbourne and 3D at Depth, have been selected after a competitive process and represent the best of breed in innovation and high value skills present in the academic and defence industry communities,

Vince Di Pietro, Chief Executive of Lockheed Martin Australia and New Zealand said the company will be awarding $75,000 seeding grants to these organisations – for a total investment of more than $900,000 – under the first phase of the program.

“We are very proud that 9 of the10 organisations selected are Australian SME organisations and universities, and this is an important realisation of Lockheed Martin Australia’s commitment to develop and deliver the Future Submarines as a sovereign capability,” Mr Di Pietro said.

“At Lockheed Martin Australia we work very hard to ensure our relationships with academia, and industry partners makes a real difference and raises the technology base for Australia.

“Initiatives such as our R&D Program for the Future Submarines demonstrates our commitment to work with Australian academia and industry to discover and evolve the best of breed technology not just for Australia, but also potentially to a global audience.”

Scott Elson, Sales & Marketing Director for L3 Oceania, said the company had been selected to develop two White Papers for the research topics: Methods and technologies to improve communications with and between submarines; and Improving the performance of video communications for use between a submarine and emergency rescue forces.

“We’re very pleased to be selected as an R&D industry partner to Lockheed Martin Australia for the Future Submarine Program,” Mr Elson stated.

“This grant will enable us to explore advanced and innovative technologies to improve communications with above the water platforms and between submarines; including the enhancement of video communications for submarines at depth to enable emergency rescue operations.

“We’ve had many years’ experience working with the RAN on submarine communication systems for the Collins Class, as well as maritime ranging operations, so we’re excited to put the specialist skills and knowledge we’ve developed from working on these systems to further Australia’s capability with the Attack Class. We’re proud to be a part of such a significant program supporting the Commonwealth’s sovereign shipbuilding capability.”

LMA said another round of seeding grants are expected to be announced later this year, following a further RFI process.

CRC Programme is valuable and effective, but has scope for improvement, a review has...