Queensland manufacturers wanting to take their business to the next level are invited to apply for Round 3 of the Palaszczuk Government’s highly successful $46 million Made in Queensland (MiQ) program.

“Since 2017 we have supported around 75 projects, which will create more than 930 new jobs over the next five years and generate approximately $92 million in private sector investment,” Mr Dick said.

“Around 40 per cent of these projects are being delivered in regional Queensland.

“And more than half of these projects have already been finalised, generating 188 new jobs and more than $28 million in private sector investment.

“So I’m thrilled that through MiQ Round 3 we will allocate an additional $6 million to help companies around the state innovate, expand, and provide highly skilled jobs for more Queenslanders.

“This funding can help manufacturers reach new horizons, transform into the advanced manufacturers of tomorrow and make a positive impact across the sector.

“The numbers behind MiQ are impressive and demonstrate this initiative is making a big splash.

“The program is helping us build a strong advanced manufacturing sector, which means more Queensland jobs, and more jobs means a stronger Queensland.”

Norship Marine was awarded $117,500 through MiQ Round 1 to purchase industry-leading equipment to extend its maritime, advanced manufacturing and engineering capabilities, and advance its operations.

The business has since grown to become one of the state’s top defence suppliers.

“Our strategic vision was to roll out manufacturing improvements across the company and reinvigorate manufacturing in the Cairns region,” Mr Groot said.

“The purchase of a CNC routing machine has allowed us to streamline component manufacturing and vessel repair processes, along with improving the quality of our products and services.

“It has given us the ability to service a broad range of industries across northern Australia, Papua New Guinea and the Pacific.

“Previously, the manufacturing of components was done manually. With the new advanced machinery, naval architects can now design and draw up the components using high-tech software, and print the parts that will then be used on ships.

“The state-of-the-art robotic technology also created five new jobs in the company within one month of project completion, and will allow us to continue to invest in employment and skilling opportunities for locals,” he said.

Mr Dick said he was excited to see the huge positive impact of MiQ funding over the longer term.

“Through programs like Made in Queensland, the Palaszczuk Government is working with businesses in our $20 billion manufacturing industry to facilitate and support them to become internationally-recognised for innovative, high-tech advanced manufacturing,” he said.

Shortlisted applicants will then be invited to submit a detailed application in November 2019.

To submit an application, or to learn more about the program, visit the Made in Queensland website. 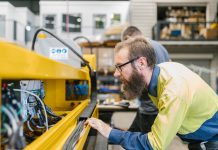 Australian PMI: Manufacturing off to a flying start in 2018