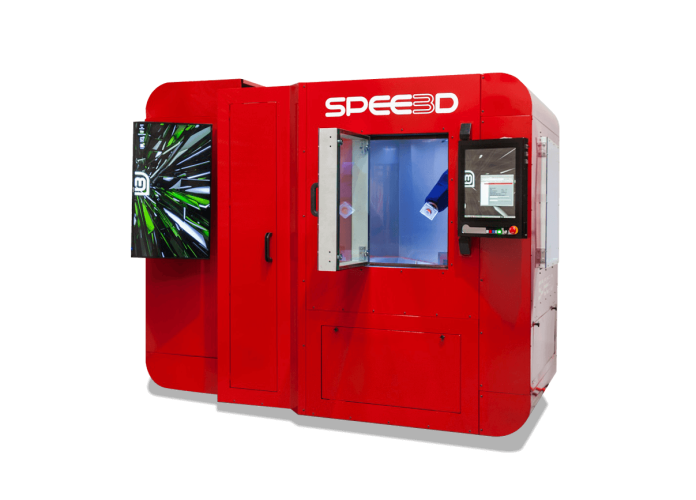 The NT Government is investing in a new 3D printer that could turn 3D metal printing, which currently is just making prototypes of parts, into a tool for manufacturing actual parts for use.

Developed by Darwin-based start-up SPEE3D, the LightSPEE3D printer is up to 1000 times faster than conventional 3D metal printers and is tipped to revolutionise manufacturing technology.

The LightSPEE3D will form the centrepiece of a new industrial research hub to be based at the Charles Darwin University (CDU) which will pave the way for the creation of jobs in the NT as well as generating new and exciting economic opportunities in the State.

NT Chief Minister Michael Gunnar, who joined CDU Vice-Chancellor Professor Simon Maddocks on Monday to announce a $400,000 NT Government grant for the purchase of the printer, said SPEE3D’s innovative technology has the capacity to disrupt the casting marketplace.

“The 3D printer is ground-breaking manufacturing technology and, significantly, the inventor is a Territorian who was a previous recipient of the NT Government’s BISI innovation grants,” the Chief Minister said.

The printer was invented by Steven Camilleri, the Co-founder and CTO of SPEE3D which has formed an Advanced Manufacturing Alliance (AMA) with CDU to be based on CDU’s Casuarina Campus.

“NT Government funds – both through our Business Innovation grants that contributed to the machine being invented, and through purchase of the machine for CDU – will help accelerate research to assist with commercialising the technology,” Mr Gunner continued.

Vice-Chancellor Professor Simon Maddocks congratulated the NT Government for its critical role in bringing the project to fruition, saying the AMA will also work to develop applications for the use of the new technology in remote areas – improving supply chains and lowering operating costs.