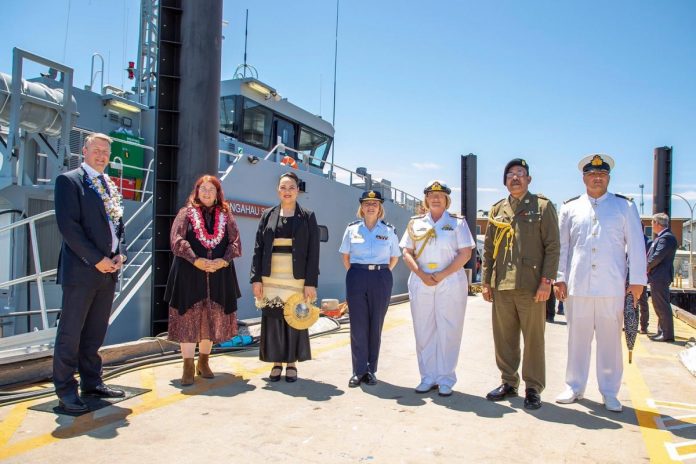 The Kingdom of Tonga received their second Australian-built Guardian-class Patrol Boat during a handover ceremony at Austal Australia’s Henderson shipyard on Friday.

The vessel, VOEA Ngahau Siliva, is the eighth Guardian-class vessel to be delivered under the Government’s Pacific Maritime Security Program (PMSP) – the successor to the original Pacific Patrol Boat Program – which saw Australia gift vessels to Pacific Island countries between 1987 and 1997.

Defence Minister Linda Reynolds said the handover represented ‘a focus on the enhanced maritime capability in the defence cooperation between our nations’.

“Australia and Tonga have long worked together in pursuit of our shared goals for sovereignty, security and prosperity in the Pacific,” Minister Reynolds continued.

“Tonga’s second Guardian-class Patrol Boat is a considerable step up in Tonga’s maritime capability, and I have no doubt the vessel will admirably serve Tonga and the Pacific region in meeting their maritime security goals.

Austal CEO David Singleton said VOEA Ngahau Siliva was the second Guardian-class Patrol Boat delivered to the Kingdom of Tonga under the Pacific Patrol Boat Replacement Project – part of PMSP – and the eighth delivered in total since December 2018.

“With this second vessel delivery to Tonga, we have now delivered eight of the 21 Guardian-class Patrol Boats contracted to the Australian Department of Defence,” Mr Singleton noted.

“We’re actually completing a vessel every three months and at any given time, we have five vessels under construction or fitout.

“Our warmest congratulations to Her Royal Highness Princess Angelika, Her Majesty’s Armed Forces of Tonga and the people of Tonga on the handover of this latest vessel to their naval fleet,” he concluded.