Braille Sign Supplies began in the home garage of Jan Juc local Travis Ashford nearly 2 decades ago. As a qualified signwriter, he began receiving requests for Braille & Tactile signage, which he found difficult to source.

Either they were cheap non-compliant imports, or they were expensive with long lead times. Travis began the process of learning to make Braille & Tactile signs himself, and soon he outgrew his single car garage, as the business took off with growing demand due to changes to the building code.

The original method involved drilling holes into the sign and then manually inserting each Braille bead. Not only was this method very labour intensive, it left the signs open to the beads being damaged by vandalism, coming loose or falling out over time, and being difficult to clean due to the engraved aspect. Despite the inherent manufacturing flaws the industry faced, Travis built a growing business using this method, but always knew there must be a better solution.

In 2014 Travis found a solution for Acrylic signs, and launched a method to produce Braille & Tactile signs using a hydraulic press, using 200-tonne of pressure and heat to form a moulded continuous-faced Acrylic Braille & Tactile sign. This was groundbreaking in the industry at the time, and after gaining the exclusive Australian rights, Travis worked to ensure the method became widely embraced as he developed his own Braille system, called BrailleForm.

A large ‘off-the-shelf’ stock range was developed, giving customers access to one of the widest ranges of signs in Australia with immediate dispatch available, and also allowed the ability to produce custom signs quickly. The new production method provided opportunity for complete flexibility with colours, designs and backgrounds, within the scope of the standards, allowing expanded artistic freedom for designers for the first time.

Despite BrailleForm’s success, Travis continued to imagine an even better way to produce signs, in particular, for metal signs, which were still being manufactured via the traditional labour-intensive process of machining and inserting Braille beads, known as the Applique method. After years of research and development, an idea was sparked to bring his concept to life at a trade show 4 years ago. After investigating options locally, Travis then commissioned a machine from Germany, with the tools designed by Travis right here in Torquay, and produced in the US.

The newly developed patented process, called BrailleFace, manufactures a continuous-faced metal Braille & Tactile sign, with excellent hygiene properties, as the entire sign is one single formed piece of material. The signs are non-flammable, and vandal resistant. Braille Sign Supplies will not only be the first in Australia to use this technology for signs, but the first in the world. Despite only just being formally launched, the new manufacturing method is already gaining interest in the Australian market and from a number of countries overseas. It is an exciting time for the innovative Torquay-based business, who took out two major regional business awards last year.

The patented BrailleFace production method allows compliant continuous-faced Braille & Tactile Signage to be produced from a single piece of aluminium / stainless steel, and other types of metal, such as brass and copper. With no parts fixed to the sign in any way, the process creates Braille & Tactile Signs that have outstanding durability, superior hygiene properties and are non-combustible.

Of significant importance in high-volume user areas, such as public transport and in the health sector, is the fact there are no engraved parts to the sign, meaning no grooves or crevices for bacteria to harbour. A continuous-faced Braille & Tactile sign is also much easier and quicker to clean. Travis always felt this was an important aspect of the old method that needed improving, and in today’s environment in the midst of a global pandemic, it is even more relevant.

Not only is this new method safer for the end-user, it is also a more comfortable sign to use, with no sharp edges or engraved parts that could dislodge over time. The smooth surface makes for improved usability for the vision impaired. 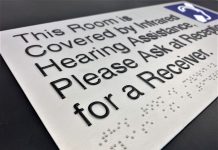