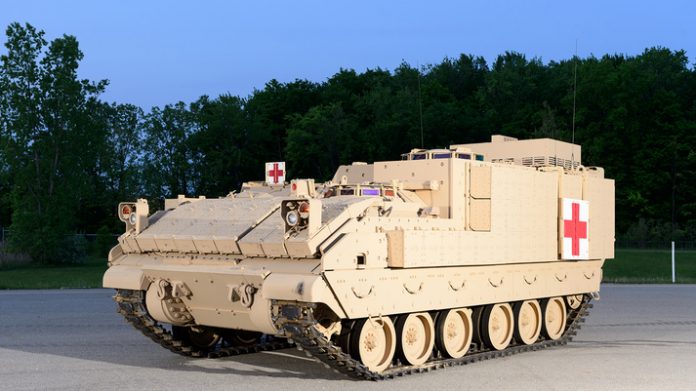 Victoria’s APV Safety Products has secured a three-year, US$500,000 ($770,000) contract to supply passenger restraints for military vehicles built by BAE Systems in the USA.

“Through our global business, we are opening the door to a global supply chain worth around AU$17 billion, introducing local SMEs to new markets and opportunities,” Ms Costigan said.

“We have a wealth of world leading, industrial suppliers in Australia and we see it as our duty to support them to achieve success through exports.

“APV is a fantastic example of this and with its involvement in this program, we will continue to provide the highest level of protection within our company’s military vehicles.”

APV’s Managing Director and CEO, Harry Hickling said the international contract signing marked a significant milestone for APV, which has been providing restraints for Australian and North American military vehicles since 2002.

“This agreement builds on APV’s track record of providing battle-proven military restraints since 2002, including the Australian Bushmaster and US MaxxpPro MRAP vehicles during the Afghanistan conflict where there was no loss of life of personnel wearing APV restraints within these vehicles,” Mr Hickling continued.

“The relationship with BAE Systems in the US means APV is working on the most technically advanced protected amphibious and land vehicle systems in the North American market.

“Certainly, this is a huge accolade for an Australian SME along with BAE Systems Global Access Program that made this possible, resulting in fantastic recognition of our capabilities on the international stage.

“Importantly, it serves as great recognition for our engineers and staff who have contributed so much to make this success possible.”