Rene Hidding, Tasmania’s Minister for Infrastructure, has announced that Metro Tasmania will be seeking Expressions of Interest (EOI) this July from major bus manufacturers to build the fleet of 100 new buses.

The new fleet is set to replace Tasmania’s ageing fleet of buses and the project has been dubbed “the single biggest investment in public transport in Tasmania’s history”.

“This process will see bus manufacturers engaging with Tasmania’s advanced manufacturing industry with the view to having them built in Tasmania, which will provide jobs for Tasmanians while delivering on our commitment to replace the ageing fleet,” the Minister said.

“This represents the single biggest investment in public transport in Tasmania’s history and highlights our commitment to providing a sustainable public transport system for Tasmanians both now and in the future.”

Valued at $18 million and fully funded in the budget, the Metro Bus Initiative will see the delivery of 100 new buses to the Metro fleet over four years.

This will be a great opportunity to absorb the shock wave caused by Caterpillar’s decision to cease heavy equipment manufacturing in Burnie. 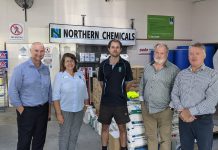 Dassault Systèmes and Airbus APWorks team up to advance use of 3D printing for...