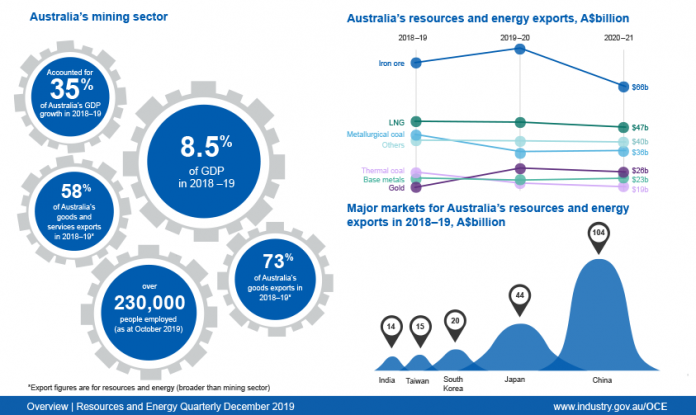 A new report produced by the Office of the Chief Economist within the Department of Industry, Innovation and Science, predicts that Australia’s resource and energy export earnings will climb to a record $281 billion in 2019-20, up from $279 billion in 2018-19.

Commenting on the report’s findings, Minister for Resources and Northern Australia Matt Canavan said the latest Resources and Energy Quarterly (REQ) showed the resource and energy sector continued to be a powerhouse for the Australian economy.

“The tremendous diversity of Australia’s resource and energy commodity exports has effectively helped to hedge the Australian economy against swings in global conditions,” Minister Canavan said.

“The record earnings are underpinned by rising export volumes of iron ore, LNG and gold. And tech-era commodities such as lithium are set to earn Australia $1.6 billion in export earnings in 2020-21, with the potential for multiples of this number by the end of the next decade.

“Our mining sector brought in a whopping 35 per cent of our GDP in the year to the September quarter 2019, and we are fending off the impact of challenging global conditions because of increasing demand for our commodities and falling world prices.

“The December REQ focuses on resource and energy commodity investment, which is also showing signs of rising due to a healthy pipeline of projects. The majority of these projects are brownfield expansions, but greenfield projects including the Adani Carmichael coal mine are notable inclusions.”

The REQ’s Major Projects list features the Adani Carmichael mine as a ‘committed’ project for the first time.

Currently under construction, the $2 billion Carmichael mine will produce 10 to 15 million tonnes of high quality thermal coal a year, ramping up to 27.5 million tonnes.

Adani, which already has 800 people working across Queensland, estimates the project will create around 1,500 direct construction jobs and almost 7,000 supporting jobs, with more jobs to be created as the mine’s capacity grows.

“More than $220 billion worth of projects, currently at the ‘publicly announced’ and ‘feasibility’ stages, could progress to the final investment decision stage in the early 2020s,” Minister Canavan continued.

“LNG, iron ore and coal account for around $200 billion of the potential $240 billion of projects in the investment pipeline. Oil and gas extraction has been the largest contributor to mining industry value-added growth in the past few years, propelled by our rapidly growing LNG exports.

“While we are not expected to see a return to the levels seen during the last investment phase, there are some significant opportunities for Australia’s resources and energy sector. That underlines the importance of the Government’s agenda to pursue new investment in the sector, new export markets and reduce red and green tape.”

The latest Resources and Energy Quarterly is available on the Department of Industry, Innovation and Science website.