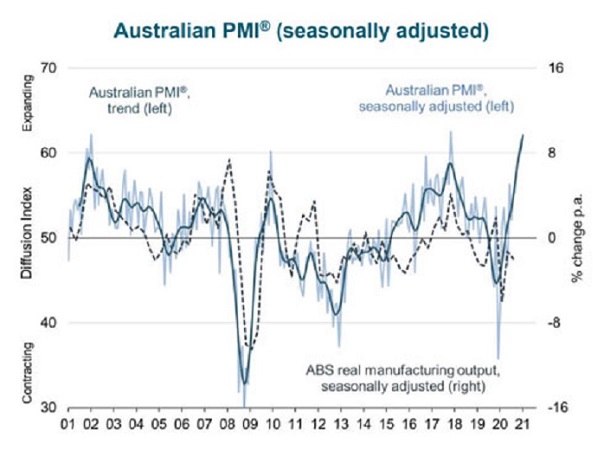 The Australian Industry Group Australian Performance of Manufacturing Index (Australian PMI) remained in expansionary territory for the tenth consecutive month, despite easing by 2.4 points to 60.8 in July.

According to Ai Group’s latest survey, all six manufacturing sectors in the Australian PMI expanded in July, with machinery & equipment (up 0.2 points to 65.0), metal products (up 2.2 points to 62.3) and chemicals (up 1.0 point to 66.1) all reaching record highs.

All seven activity indices also expanded in July, although three moderated slightly from the previous month.

New orders remained in expansionary territory despite dropping 8.1 points to 62.5, while production expanded in most states and territories (up 1.1 points to 61.8) but was lower in NSW due to lockdowns.

Ai Group’s report also found that the input prices index increased to a record high in July (up 5.8 points to 84.6), eclipsing the previous record set in February 2008.

Manufacturers’ selling prices rose for a sixth consecutive month to record the second-highest result for this index since the series began in 2007 (up 1.1 points to 64.7), suggesting that more manufacturers are passing on some of their higher input costs to customers.

According to the report, the average wages index increased to its highest reading since 2008 (up 7.5 points to 69.1), reflecting in part some reversal of wage freezes from last financial year. July also coincided with a 2.5% increase to the minimum wage which AI Group said would filter through to award rates across the industry.

Ai Group Chief Executive Innes Willox said the manufacturing sector recorded another month of expansion in July albeit at a slower rate of growth from June’s record expansion.

“A significant headwind for the sector is that Sydney’s toughest restrictions relate to local government areas where there is a concentration of manufacturing sites and the manufacturing workforce.

“We expect the dampening impacts of these restrictions will flow along supply chains across the country with some offset from the easing of Victorian restrictions.”