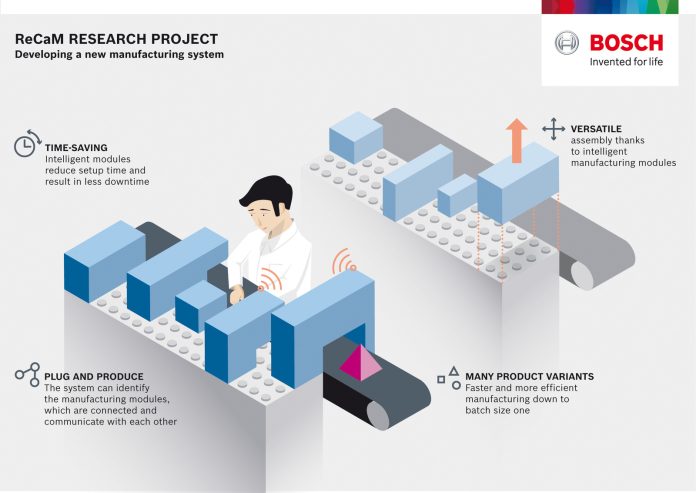 A Bosch-led consortium consisting of nine partners is developing a novel manufacturing concept that aims to create a highly versatile manufacturing system.

Project manager Sebastian Schröck, who works at Bosch, said the consortium is aiming to develop a new modular manufacturing system that would answer the demands for customised products and slash production times even further.

“We want to make manufacturing more efficient and more profitable. The aim is to cut the time it takes to set up a running system by 30 percent,” Mr Schröck added.

At present, production lines are largely designed for just one product and for a particular batch size of that product. However, because products are becoming more and more personalised and batch sizes increasingly variable, production lines have to be adjusted frequently, which not only takes time but increases the risk of errors as well.

The research project, called ReCaM, envisions using “plug and produce” modules as a solution. The idea behind this project is similar to when computers can independently recognise keyboards or printers through plug and play applications. To adjust production, workers will simply be required to add existing modules or remove those that aren’t needed.

The ReCaM team is determined to show that such connected and adaptable manufacturing systems can prove themselves in practical application. To that end, all nine partners in the research consortium are contributing their various areas of expertise to find a solution together: the university institutes are developing the standards, mechanical engineers are constructing the modules, and the manufacturing companies such as Bosch are testing the concepts in practice.

The ReCaM project is funded by the European Union to the tune of 5.3 million Euros as part of its “Horizon 2020” research and innovation program (grant agreement # 680759).

The main objective of ReCaM, which stands for “rapid reconfiguration of flexible production systems through capability-based adaptation, auto-configuration, and integrated tools for production planning”, is to give Europe an edge over its global competitors by driving forward the smart factory.