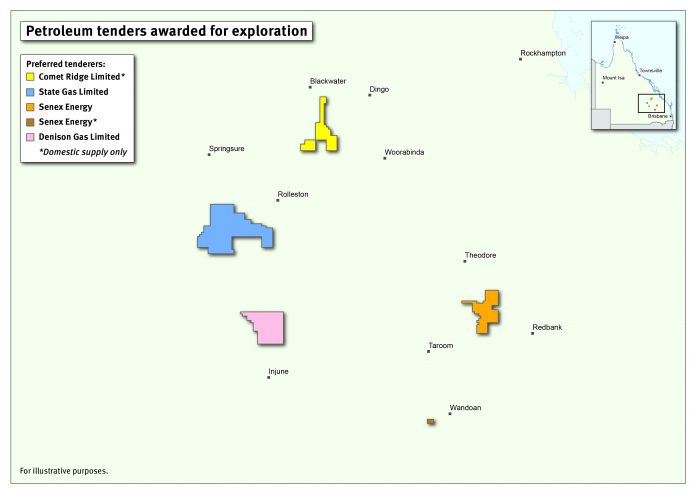 Four Queensland gas companies have been awarded tenders for gas exploration on over 3000km2 of new acreage in central and south-west Queensland.

Comet Ridge, Senex Energy, Denison Gas and State Gas will explore areas that are near their existing infrastructure with the aim of getting more gas to the market in a more efficient manner.

Senex Energy will explore areas near their existing Project Atlas near Wandoan and south east of Theodore.

The official announcement was made by Manufacturing Minister Glenn Butcher.

“Queensland has an economic plan for recovery built on its traditional strengths like resources. Queensland’s gas and manufacturing industries support more than 200,000 jobs now,” the Minister said in a press release.

“Supporting exploration maintains a pipeline of future resources projects and keeps gas flowing to our manufacturers. Any gas from more than 450 km2 of this land is guaranteed for the Australian market. That’s gas for feedstock and energy for our manufacturers and their workers.”

Senex Managing Director Ian Davies revealed that the company has already invested $400 million in gas projects in regional Queensland and that the new acreage would result in over 100 jobs to be created in development.

“Senex will also be supporting a further 30 direct jobs and hundreds of indirect jobs by providing gas to its new customer – Gladstone’s oil recycling facility Northern Oil Refinery – from the expanded Atlas project. This adds to our existing portfolio of domestic customers with a Queensland presence including CSR, Orora, Visy and CleanCo Queensland, reinforcing Senex’s importance as a supplier to the east coast market,” Mr Davies said.

“We look forward to working collaboratively with all stakeholders to bring these benefits, and more, to Queensland communities.”

New Fair Work campaign to focus on apprentices and trainees