For almost 50 years, Habitat for Humanity has focused on helping people in local communities around the world build or improve “a place they can call home.” Now, some of those homes may soon be 3D printed.

70 – 80% of the home is 3D printed, including all interior and exterior walls. The remainder of the house is a traditional build. It was a first for the nonprofit organization and an eye-opening experience to potential opportunities to provide even more affordable housing.

“This is really a moonshot opportunity for Habitat for Humanity Central Arizona,” says Jason Barlow, president and CEO, Habitat for Humanity Central Arizona. “When we consider the housing issues facing Arizona, the need for affordable homeownership solutions becomes clear. If we can deliver decent, affordable, more energy-efficient homes at less cost, in less time, and with less waste, we think that could be a real game-changer. Think of the implications.”

Creating a new workflow from design to 3D print

Candelaria Design Associates’ principal Mark Candelaria is a member of the Habitat board and donated the firm’s expertise to kick off the project. Candelaria team director and project manager Damon Wake adapted a previously permitted, standard habitat plan for a wood-frame house that had been designed in AutoCAD. The file was then exported from AutoCAD as a STEP file for further design work in Autodesk Fusion 360.

“You have to eliminate 99% of the information that you’ve drawn in your architectural plans in order to make a print file that tells the print head where to go with the concrete,” Wake explains. “We created the CAD file with a continuous polyline. That was brought into Fusion 360 to turn it all into surfaces and create cutouts where the print head would stop and start for doors or windows.” 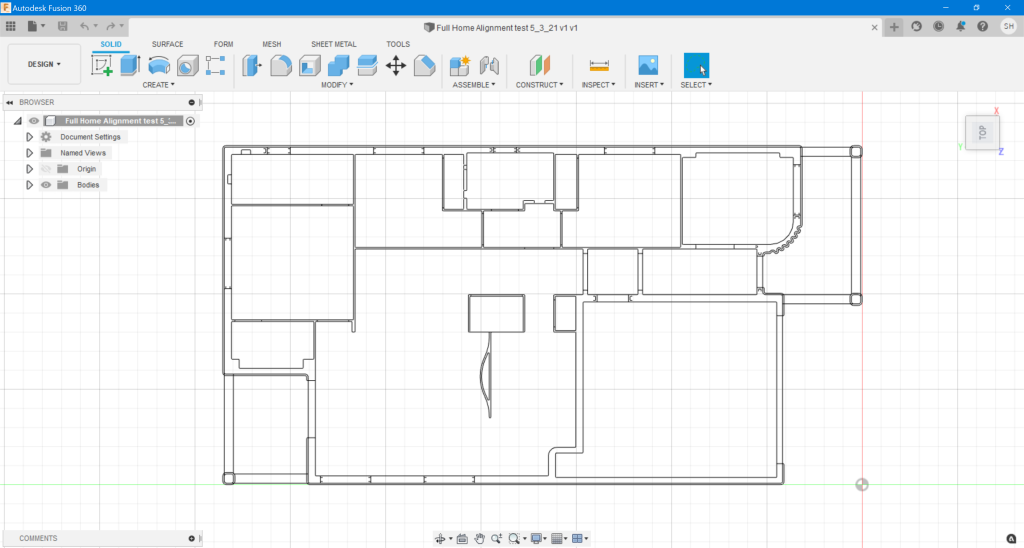 “The printer is essentially a very large version of a 3D printer—but instead of using melted plastic, we’re using wet concrete and stacking it,” Hager says.

Each of the slices in Fusion 360 is a layer for printing the concrete, so the printer will know to follow a specific pathway. And it’s critical to use Fusion 360 because the printer only recognizes certain file types that Fusion 360 can export.

Discovering the benefits and opportunities for 3D printing homes

3D printing the concrete foundation and walls for the Habitat for Humanity project took a cumulative total of 42 hours to print. From there, it was ready for the rest of the traditional construction, including the roof and interior. The expected move-in date for the new residents is late February 2022.

The project revealed how the main structural component of a home could be constructed with less time and resources. At the same time, volunteer time could be maximized. PERI 3D Construction estimates if a printer is on-site, a house can be 3D printed and removed within a week for typical projects.

“The nice thing is you only need two skilled operators and maybe one other construction helper that doesn’t necessarily know much about 3D printing, but they are there to lend a hand,” Hager says. “With a team of three, you’re able to do the work of an entire team of framers.”

“This could be a game-changer for affordable housing—and any housing—if we could significantly reduce the cost and time of construction,” Barlow says. “Where this will become more affordable to us is when we can print five or so two-story townhomes attached in a row at one time.”

As 3D printing homes and structures gain momentum with these early proof-of-concept success stories, Hager sees Fusion 360 as an invaluable and integral part of the process. And anyone can start small just to get an idea about this type of fabrication.

“You can pick up Fusion 360 very quickly and get up to speed with all the tutorials,” Hager says. “Start dipping your toes into it. Pick up a $200 printer, download a free license, and try to 3D print something small. It’s a nice introduction to the fabrication side and really understanding how it works.”

Learn more about this project on Redshift.