The Renault Trucks Lyon Powertrain Engineering department announced that it is working on an additive manufacturing process that is set to boost the performance of engines.

Damien Lemasson, project manager at Renault Trucks, remarked that although the complete engine was already designed virtually, rocker arms and camshaft bearing caps were manufactured by metal 3D printing and successfully bench-tested for 600 hours inside a Euro 6 engine.

“The aim of this project is to demonstrate the positive impact of metal additive manufacturing on the size and weight of an engine. This process has enabled us to reduce the weight of a 4-cylinder engine by 120 kg or 25%,” Mr Lemasson explained.

“The tests we have carried out prove the durability of engine components made using 3D printing. It’s not just cosmetic.”

Mr Lemasson said metal 3D printing presents a number of new development opportunities for thermal engines. He said the process can be used to create complex organic forms, as well as optimising the sizing of parts and reducing the number of assembly operations and therefore the number of components in an engine.

“Additive manufacturing releases us from constraints and unlocks the creativity of engineers. This procedure is a source of disruptive technology for the engines of tomorrow, which will be lighter and more functional, thereby offering optimal performance,” Mr Lemasson added.

“The number of components in the DTI 5 engine has been reduced by 25%, making a total of 200 fewer parts.”

Metal 3D printing creates a number of advantages for haulage companies, allowing them to optimise the overall operating costs of their fleet of vehicles, as a reduction in engine volume will lead to greater payloads and lower fuel consumption.

Renault believes that this manufacturing procedure can be used for highly specific applications or small runs in the short-term.

“Following on from these successful initial tests, engineers at Renault Trucks will be continuing their work on this manufacturing process to further increase the performance and functionality of truck components,” the company said in a press release. 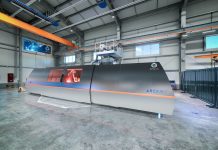 Australia Post and The University of Melbourne to grow innovation in drone delivery and...