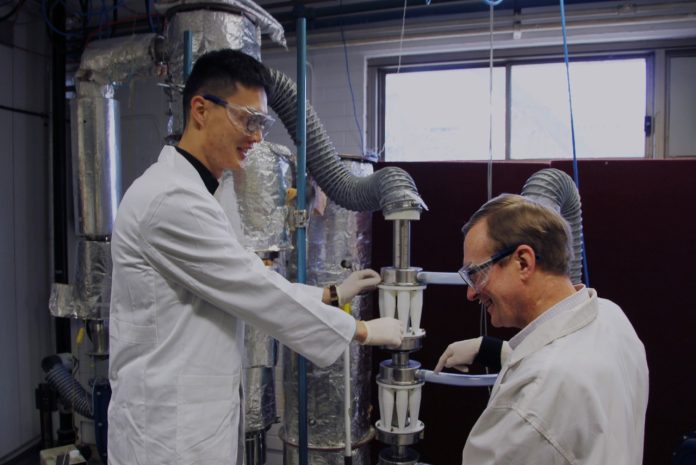 Chemical engineers at the University of Sydney have developed a new spray dryer that could offer food and medicine firms a more efficient and cost-effective method for producing their goods.

Developed and tested at the ARC Training Centre for the Australian Food Processing in the 21st Century, the new pilot-scale spray drying system is particularly well suited for materials with heat-sensitive compounds, such as foods, pharmaceuticals, waste and bioactives.

Professor Timothy Langrish, who is leading the research with his PhD candidate Harry Huang, said the new design also has advantages for product purity and recovery in other applications, such as detergent manufacturing.

“The benefits for industry will include both cost savings and quality improvements for foods and pharmaceuticals to give health gains,” Professor Langrish said.

“We have only tested the new spray dryer with salt so far, but all foods and pharmaceuticals will potentially benefit from this new design. Many waste products will also be treatable in ways that current designs cannot do.”

He said the new system also overcomes one of the major issues plaguing spray dryers today – the settling of particles and sediment onto the inner surface of the dryer.

“The new design features of this spray dryer have created a stable air flow, which reduces the likelihood of particles colliding with the wall, thereby reducing the amount of deposition and improving product recovery,” the Professor added.

Mr Huang remarked that tests of the new system showed a low amount of wall deposition, with less than 5% of solid materials remaining in the drying chamber compared to more than 30% wall deposition in most standard spray dryer designs.

“This outcome means almost all of the dried particles can be recovered from the system without being exposed to high temperatures for a long period of time,” Mr Huang said.

“This is particularly important for products such as foods, pharmaceuticals and bioactives, as the short times reduce the likelihood of degradation of heat-sensitive compounds.”

Professor Langrish said their next goal was to develop the system further to dry materials at a higher capacity, adding that the specific design feature which reduces pressure fluctuations was currently being patented.