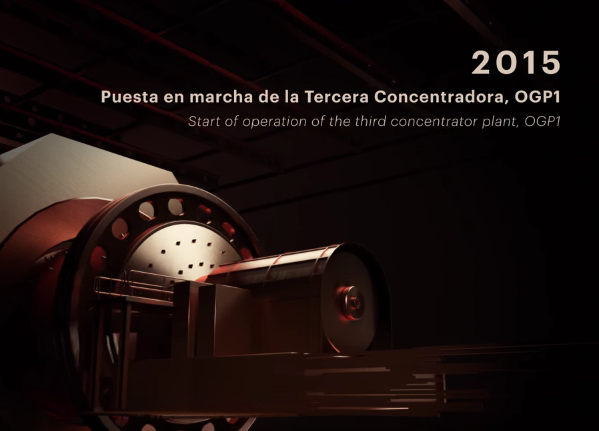 Minera Escondida, the subsidiary of BHP Billiton, has officially opened its third copper concentrate plant during a ceremony carried out on site.

The US$4.2 billion Organic Growth Project One facility will add 152 ktpd to the capacity of Escondida’s two existing concentrators, providing the operation with unmatched copper processing capacity of 422 ktpd.

“The plant that we inaugurated today follows a project that required 60 million labour hours and involved 9,200 people during its peak construction period. This project has been a huge challenge but was completed with an excellent safety record,” said the President of Minera Escondida, Hilmar Rode.

The commissioning of Organic Growth Project One, coupled with the completion of the second desalination plant that the company is building at Puerto Coloso, gives Escondida the potential to operate with three concentrators in the medium term.
The company believes that this added capacity will offset the natural ore grade decline and will contribute to the recovery of production in the medium term.

The president of BHP Billiton Minerals Americas, Daniel Malchuk, noted that Escondida has increased its processing capacity by more than ten times and its copper production by almost four times during its 25 years of operation.

“We have just completed the Organic Growth Project One concentrator plant and we continue to invest in the Kelar gas-fired power plant and the Puerto Coloso desalination plant. We continue to work hard and look towards the future with optimism”, he indicated.

Last year, Minera Escondida’s copper production was 1,152,510 metric tons, which were comprised by 826,220 tons of copper contained in concentrate and 326,290 tons of copper cathodes.
The company’s average production capacity is expected to be approximately 1.2 million metric tons per annum for a decade from Financial Year 2016, with minimal further capital required.

Total Plant Management 2016 is back for its 7th year in Melbourne on the...