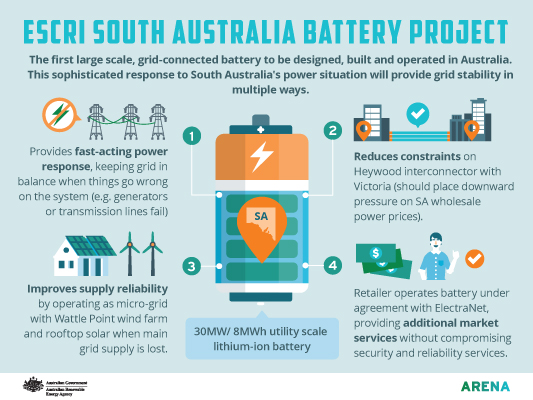 The Australian Renewable Energy Agency (ARENA) will provide up to $12 million in funding for a new large-scale battery designed to demonstrate how energy storage can strengthen the grid and potentially lower energy prices.

The 30MW, 8MWh battery, to be deployed at the Dalrymple substation on the Yorke Peninsula, is the second phase of the Energy Storage for Commercial Renewable Integration (ESCRI) project which examined whether energy storage was a commercial prospect for integrating intermittent renewable energy into the electricity grid.

ARENA CEO Ivor Frischknecht said the battery, which is expected to cost around $30 million, would make an important contribution to security and reliability of supply in the context of high renewable energy generation in South Australia.

“This is also the first large-scale grid-connected battery to be designed, built and commercially operated in Australia largely with private investment from energy providers,” Mr Frischknecht said.

“It may not be the biggest battery in the world, but pound-for-pound it will pack a big punch in demonstrating how utility scale storage can contribute to a stronger South Australian energy network.”

The battery will be designed, built and owned by transmission provider ElectraNet, which is in discussions with potential energy retail operators to provide market services.

It will work together with the existing 90MW Wattle Point wind farm and rooftop solar PV in a microgrid to provide contingency power for the Dalrymple service area during a loss of supply.

Mr Frischknecht said the battery was expected to be operational by February 2018.

“Australia is now a leader in demonstrating the potential of large-scale battery technology to facilitate high levels of renewable energy penetration,” he added.

“This project will complement the Hornsdale battery and other ARENA-funded grid support projects to help deliver reliable and secure electricity in South Australia,” Mr Frischknecht said.

“We thank the Government and ARENA for their funding commitment to this important demonstration project on the Yorke Peninsula,” he said.

“The learnings and expertise that we will gain from this project will greatly assist to support the shift in energy mix and landscape that South Australia is experiencing.”