Bosch is throwing its weight behind the push to establish a hydrogen economy: “On the path to a climate-neutral future, we have to make it possible for energy-intensive industries to shift to renewables. Hydrogen will be a key element in security of supply,” says Rolf Najork, the Bosch management board member responsible for industrial technology and the company’s manufacturing technology chief. Bosch can offer the technology needed for hydrogen use in various sectors.

The company is developing fuel cells for mobile and stationary applications, equipping hydrogen filling stations with compressors, and producing hydrogen in its own plants. In addition, Bosch plans to enter the electrolyzer components business. “We are getting hydrogen-based technologies out of the laboratory and into industrial practice – onto the roads and into factories,” Najork says. Through a newly established project unit, Bosch is making its hydrogen expertise available for other companies. It will be presenting its hydrogen activities at Hannover Messe from May 30 to June 2.

In its Industry 4.0 lead plant in Homburg, Germany, Bosch is demonstrating what a hydrogen cycle may look like in the factory of the future. Using renewable energy, an electrolyzer produces green hydrogen. This hydrogen will then be used for manufacturing operations and mobility, with fuel-cell vehicles refueling with the hydrogen that Bosch technology has already compressed. For industrial processes, a stationary fuel cell developed by Bosch converts hydrogen into heat and electricity. Energy flows in the plant are controlled in line with demand, using Bosch Industry 4.0 software.

The Energy Platform is already being used in more than 120 of the company’s plants. Manufacturing operations account for some 90 percent of Bosch’s global energy consumption. This gives the company a lever: “We are continuously improving our carbon footprint. As our Industry 4.0 lead plant, Homburg plays a pioneering role in our global manufacturing network. We are systematically reducing our local energy consumption, and generating as much of that energy as possible from renewables. We have to tweak both these variables,” Najork says.

A solution developed by Bosch Rexroth and Maximator Hydrogen for compressing hydrogen for filling stations, storage tanks, and pipelines is also to be trialed at the Homburg plant. By 2030, Bosch Rexroth and Maximator Hydrogen want to make this technology available to 4,000 hydrogen filling stations. One in three hydrogen filling stations worldwide would then be equipped with Bosch components. “Industry is paving the way to a climate-neutral future. Bosch industrial technology will deliver key components for the cross-sectoral, ecological transformation of the economy and society,” Najork says. For hydrogen compressors, Bosch Rexroth supplies low?maintenance, scalable systems solutions with electrohydraulic drives, power electronics, and automatic seal changes.

The company’s portfolio currently includes drive units from 75 to 250 kilowatts. This gives filling-station operators a low-cost option when venturing into hydrogen technology, as well as the chance to adapt the solutions to their needs. Compared with the alternatives available in the market, the new, container-based compressors have the potential to reduce operators’ total costs of ownership by one-half. In this way, Bosch and Maximator Hydrogen are helping considerably to make the use of green hydrogen economical – in passenger cars, commercial vehicles, buses, and trains.

Energy demand is growing. One of the challenges here is the fluctuating availability of renewable energy. This is where stationary solid-oxide fuel cells can help. Distributed micro-power plants are used flexibly where the energy is actually consumed, which makes them ideal for efficiently generating power for industry. In the Homburg plant, a fuel-cell system is now to be used in a sector-coupled hydrogen cycle. At the Telekom subsidiary Power & Air Solutions, Bosch fuel-cell technology is being used for the first time to power a data center.

Together with the Chinese automaker Weichai and its technology partner Ceres Power, Bosch is planning to launch solid-oxide fuel cells on the Chinese market. All told, more than 50 stationary Bosch fuel cells are now in operation at the company’s and its customers’ locations. Each of these systems is connected with the internet of things. Over the fuel cells’ entire lifecycle, data is fed into the cloud. This gives rise to digital twins that allow individual systems to be monitored in real time. Bosch plans to start production of stationary fuel cells in 2024. Production will take place at three Bosch locations in Germany: Bamberg, Homburg, and Wernau.

In the future, Bosch intends to supply not only the technology for compressing hydrogen and converting it into electricity with the help of fuel cells, but also to be involved in the production of hydrogen. The company is now planning to start developing components for electrolyzers. These units use electricity to cause a chemical reaction that splits water into hydrogen and oxygen. Provided the electricity comes from renewables, the end product is green hydrogen. By the end of the decade, Bosch aims to invest up to 500 million euros into the volume production and marketing of the core component of hydrogen electrolysis: the stack.

These stacks are combined with power electronics, sensors, and control units to form smart modules that are designed for various outputs, sizes, and applications, and that can be connected and serviced via a cloud. Bosch hopes to launch its smart modules in 2025, with initial pilot plants to be equipped with modules next year. When developing this technology, the company plans to establish partnerships along the entire value chain so that it can offer production-ready products as quickly as possible.

Bosch is playing a prominent role in the establishment of a hydrogen economy and actively supporting the move to alternative energy. It is taking the experience and expertise it has gained in the volume production and digitalization of sustainable technologies and making it available to partners and customers. In this context, Bosch has set up a unit that initiates and develops green hydrogen projects and brings together various stakeholders. One of the projects unit’s first hydrogen projects is H2Giga. Funded by the German Federal Ministry of Education and Research, the project aims to design powerful, durable, and scalable electrolyzers – including digital twins that simulate process steps in production, set-up, and maintenance. 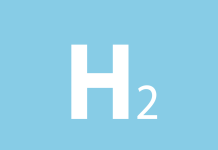 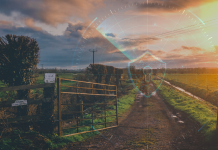 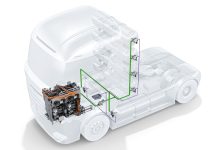 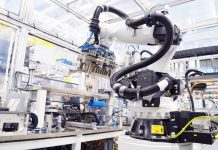