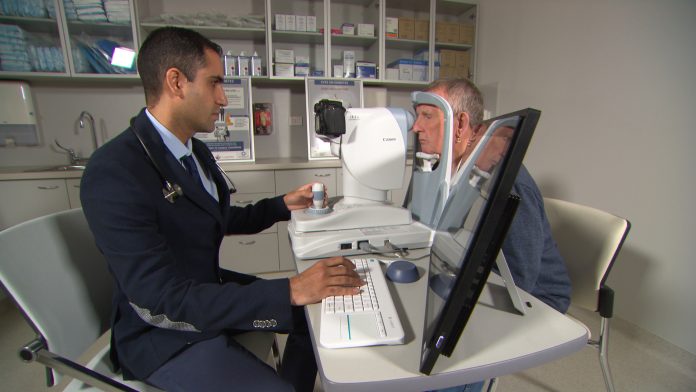 CSIRO has developed an innovative eye-screening technology that could help prevent blindness in the 1.7 million Australians living with diabetes.

Developed in Perth, this artificial intelligence-driven technology enables GPs to test diabetic patients for diabetic retinopathy, a debilitating condition that can lead to blindness if untreated.

The technology’s creator, CSIRO’s Professor Yogi Kanagasingam, said the innovation could help people with diabetic retinopathy receive treatment faster, as currently only specialists can screed for the condition.

“Patients at risk of this condition would usually be referred to a specialist for screening, waiting six weeks or more – now it can potentially be done in a single 30-minute visit to a GP,” Professor Kanagasingam said.

The technology has been trialed at the GP Superclinic at Midland Railway Workshops in Perth, where GPs successfully screened 187 diabetic patients, taking high resolution images of their eyes.

As a basis for comparison, the images were then independently analysed by both the technology and an ophthalmologist.

Professor Kanagasingam, who was also a trial co-lead, said the results suggested that the technology was as effective as the specialist in detecting signs of diabetic retinopathy and grading its severity.

“Early detection and intervention for diabetic retinopathy is key, and this new tool is the first step to help GPs prioritise patients for treatment,” the Professor said.

“It could help avoid unnecessary referrals to public hospitals, potentially reduce waiting periods for patients and enable ophthalmologists to focus on patients needing treatment and surgery. It could also help reduce the financial impact of diabetes on the Australian economy, which is estimated to cost up to $14 billion a year.”

The artificially intelligent grading software, affectionately named Dr Grader, has been licenced by TeleMedC, who will seek to make the technology commercially available.

The company plans to install the software at 20 GP clinics in Western Australia over the next few months, before expanding across Australia.