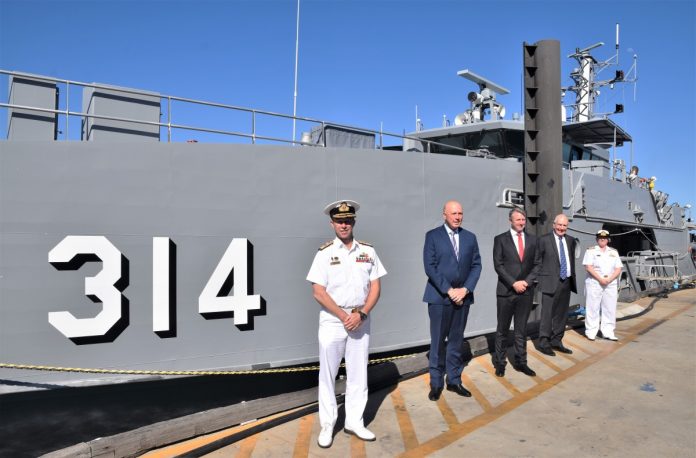 Austal Australia has successfully delivered the first of six Evolved Cape-class Patrol Boats (ECCPB’s) to the Royal Australian Navy (RAN) at a ceremony held at its Henderson shipyard in Western Australia.

The vessel, ADV Cape Otway, was officially accepted and named by Defence Minister Peter Dutton, who was accompanied by the Chief of the RAN, Vice Admiral Michael Noonan, and Head of Maritime Systems, Capability Acquisition, and Sustainment Group, Rear Admiral Wendy Malcolm.

“Sheds don’t build ships, people do. And it’s great to celebrate today with representatives from Austal, the Department of Defence, our proud supply chain partners and many more businesses in the defence industry across Australia,” Mr Gregg continued.

“This first Evolved Cape-class Patrol Boat was a true team effort, drawing on the expertise, drive and commitment of hundreds of talented people who are fundamentally contributing to the national security of this country.

The 58-meter aluminium monohull patrol boat is the first of six to be supplied to the RAN under a A$324 million deal signed in May 2020.

The Evolved Capes have more capabilities than the baseline Cape-class Patrol Boats, with new, larger amenities that can accommodate up to 32 personnel, better quality of life systems, and advanced sustainment intelligence systems.

The vessel was built in around 18 months, directly employing about 400 people in Western Australia and involving over 300 supply chain partners across Australia.