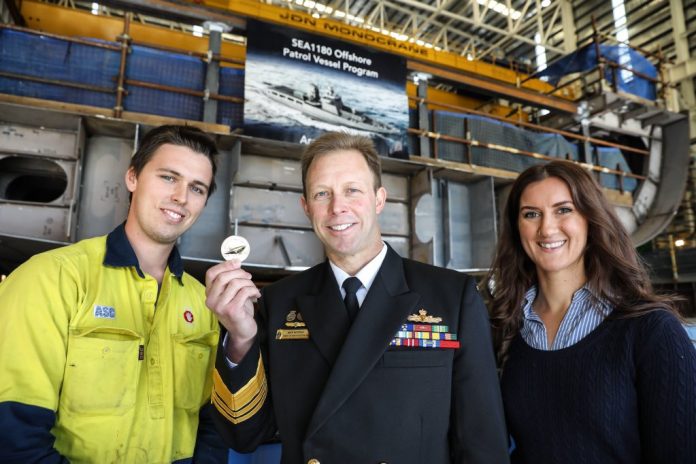 In the second major milestone of Australia’s newest warship construction program, the first of Australia’s Arafura Class Offshore Patrol Vessels (OPVs) has celebrated a keel-laying ceremony that marked the official start of the ship’s life.

“This is another reminder of the importance of the Arafura Class program towards Australia building a sovereign naval shipbuilding capability,” Mr Wagner said.

“As the prime contractor and designer for the SEA1180 program, we have been delighted with progress so far, and remain confident that we will deliver all 12 vessels on time and on budget for the Royal Australian Navy.”

“The Arafura Class is ASC’s second shipbuilding program, commenced as we continue to successfully complete the Air Warfare Destroyer program, and we are very pleased at its progress to date,” Mr Whiley continued.

“I would also like to pay tribute to the skilled and experienced workforce of ASC Shipbuilding, who are carrying out the shipbuilding work on this program, under contract to ASC.”

The first two OPVs will be constructed at the Osborne Naval Shipyard in SA by ASC, with the Australian steel, cut in Western Australia by Civmec.

The remaining ten warships will be constructed at Civmec’s facility in Henderson, with the Australian Maritime Shipbuilding and Export Group (AMSEG) – a joint venture between Civmec and Luerssen Australia –  to play a major role in the construction.